Stephen and Adam Sills wanted to experience their safari the original way – on foot!

Our trip started on the north-eastern edge of the Serengeti National Park, walking through remote wilderness occupied only by Maasai herdsmen, their cattle and wildlife.

We were incredibly fortunate to have the very rare opportunity to be accompanied by one of only two known “Dorobo” tribesmen still living in the area. Toryia, a man in about his mid fifties, grew up and spent his whole life hunting and living off the land in this area. The Dorobo people were some of the earliest inhabitants of this area, but were displaced by the Maasai when they came to this area about 200 years ago (Dorobo means poor person in Maasai, because they have no cattle).

As we walked from camp to camp, Toroyia showed us secret caves inhabited by porcupines, and others with Maasai paintings.  He also described how things had changed from the way they used to be when he lived here as a child – “ There are Maasai and their cattle everywhere. This makes hunting very difficult because it disturbs the game”. The drought had forced the Maasai north to look for better grazing and water for their cattle.

Walking  and lightweight camping on the edge of the Serengeti. 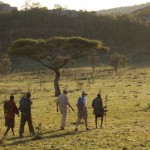 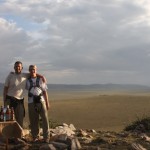 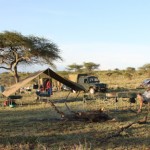 One morning we set off from camp in a westerly direction, where we had heard lions roaring during the night. About three miles from camp we came to some kopjes (ancient rocky outcrops), which are a favorite hangout for lions. We climbed a big rocky whaleback, while Toroyia went off to look for any sign of the lions. After about fifteen minutes, we were summoned by Toroyia to climb a nearby kopje to look at some vultures gathered there.

As we approached the scene slowly from behind the outcrop, Toroyia had his bow at the ready with arrows tipped with deadly poison, followed by me with the rifle, and then Stephen, Adam and Douglas and a Maasai warrior with his spear. We climbed up over the rock and vultures scattered in every direction and took to the skies, revealing a skull and a few bones – the only remains of a Coke’s hartebeest killed by the lions during the night. 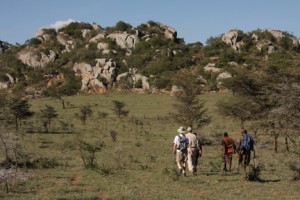 After we had investigated the scene, we decided to methodically go through the kopjes to find the perpetrators of the kill who would definitely be around, sleeping off last night’s meal.

We approached the first kopje, and Toroyia and the Maasai warrior moved to the front. We started to climb up the side of the kopje and when Toroyia jumped onto a rock at the crest of the kopje, we heard one almighty growl! Toroyia stood his ground and stared down a very angry lioness. He told us to go back around and to the left of the kopje where we should see the lion. Since we were giving her space, I was expecting to see the lioness disappearing off into the distance, but instead she came running towards us from the other side. The two surprised parties met, the lioness growled and gave a short mock charge as I cocked my rifle. The meeting was close but brief as the lioness broke off her charge and turned to escape into the bush. We gathered and stood on a rock to watch the angry lioness from about a hundred and fifty yards away flicking her tail and scolding us for disturbing her sleep. I felt that her reluctance to run off and leave the area was an indication that she might have had cubs hidden somewhere in the kopjes, so we left her in peace.

Toroyias’ first reaction was to ask Stephen in a very calm voice “ did you get a picture?” Toroyia’s calm personality, and knowledge from a lifetime of living off the land put him worlds apart and in a developed country he would be a famous celebrity… a legend in his own time!

The next part of the trip took us to the Yaida Valley five and a half hour’s drive from the small town of Karatu. It was here that we spent four days, getting an insight into the daily lives of the Hadzabe people.  These gentle people of the bush have been pushed into marginal hunting areas by more aggressive tribes throughout history, and now live in hot low rainfall areas which is even today being encroached by farmers and pastoralists, despite the rainfall and soils being unsuitable for farming or grazing livestock.

As we spent time with living legends, masters of bush-craft and survival, we learned what to look for when gathering edible roots and how to roast them on a fire made by rubbing two sticks together. 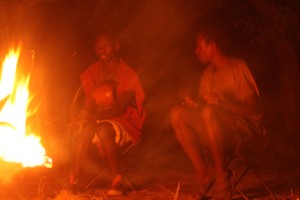 We also learned how to climb a baobab tree, by driving pegs into its soft stem, to raid beehives for honey.
What was most impressive was to see how to make bows and arrows and how to turn a 5” nail into a deadly arrow tip. After all our basic lessons we learned how to hunt the traditional Hadzabe way –  on foot with a home made bow and arrows, including some tipped with deadly poison for larger game animals.