Many guests on safari have had their expectations of what they want to see on safari influenced by what they see on TV’s National Geographic and other wildlife channels. Because of these amazing wildlife documentaries, many people want to see large predators hunting and killing prey animals, but to see this is largely a matter of luck. However what is even more amazing is to see the miracle of birth taking place. 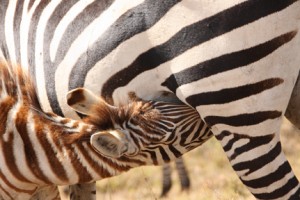 February is generally a great month to see baby animals in East Africa, and if you are patient and lucky enough you might witness baby animals being born. On three safaris between January and February, we not only saw babies of many species, but we got to witness the birth of four wildebeest and a Thomson’s gazelle.

By watching from a good distance, so as not to disturb the expectant mother, we found that with wildebeest, the birthing process usually lasts about thirty minutes. Once the baby has been born, it takes about four minutes to stand up and about ten minutes to be able to walk off with its mother!
A baby Thomson’s gazelle on the other hand takes about an hour to be able to keep up with it’s mother.