We were on safari to witness the wildebeest migration in the green season, when they tend to disperse on the Plains, and we did. Wildebeest were everywhere – around us, behind us, and spread out far into the d 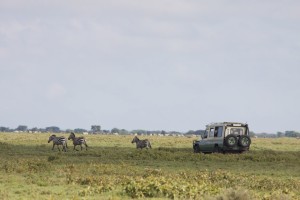 istance. Sometimes we could see lighter-colored bands of animals, which were herds of zebra.  The numbers were staggering.

Such a mass of large animals feeding and moving across the Plains has a huge effect on the environment, and their effect on it is never in isolation.

They trample the weeds, and thrash any bushes, thus favoring grasses over thicker vegetation. They mow the grass, and thus make it easier for certain species of grass to thrive – often species that suit their diet.

They fertilize the earth with their dung piles. This creates a perfect world for dung beetles (There are over 100 species of dung beetle in the Serengeti Plains 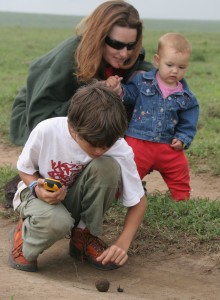 alone!). These break up and bury the dung, aerating the earth, and placing the fertilizer where it is most useful.

The beetles are helped in that role by termites, who live mostly underground, and are just as active. One huge family of termites – the Harvester termites, feed on the surface during daylight hours. Sometimes there are so many that it sounds like rain when they are snipping off leaves with their mandibles!

So many insects abound when it rains regularly and the massive herds are here, and this creates a bonanza for many other creatures.

It is astounding how many creatures come here. A flock of Wattled Starlings and a Yellow Wagtail or two are invariably seen within a few feet of a large ungulate, feasting on insects which are flushed out of the grass as they walk.

Rather than a migration of certain species, what we are really seeing is a massive surplus of food, plenty of water and sunlight, creating a huge 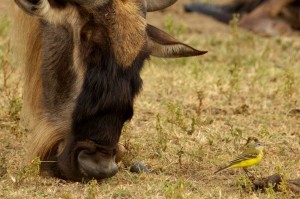 party – a feast. There is so much surplus at this feast that everyone, including the cooks, waiters, decorators, hosts and the guests are able to celebrate. Of course with so much going on, the odd disappearing member of the group has no effect of the whole, is hardly missed, and is much appreciated by whoever benefits – predator, scavenger or decomposer (such as maggots or flies).