In 1989 and 1990 African wild dogs were seen quite frequently in the Serengeti Plains during the rains and short dry season (December – April). Then sometime in 1990 they disappeared. I think the last time I saw three individuals was in 1991 near the Ndutu woodland. This was very sad as they are the second most endangered African predator, and are wonderful animals to watch.

They are formidable hunters and when in reasonably sized packs have some of the highest success rates of making a kill once they begin the chase. The chaos chasing wild dogs make in a herd of wildebeest is something to watch, and panicking animals usually stampede. The dogs can run at speeds of up to 66kms per hour (40 mph) for an hour! Such stamina is almost impossible for any prey species to match, their only hope being to disappear into the herd.

It is thought that the Serengeti wild dogs died of a rabies epidemic, and that because their pack ranges are so vast they were increasingly coming into contact with domestic dogs who might have been a reservoir for the disease. All this is hard to prove, even though at the time various packs, both in the Tanzanian Serengeti National Park and theneighbouring Kenyan Masai Mara Game Reserve, were being studied by wildlife researchers. Because they cover such vast distances in their wanderings and much of that is in woodland, they are hard to find and follow.

Occasionally wild dog sightings would be reported, mostly in the Loliondo area outside the park, and in 1997 Tanzania National Parks in conjunction with a researcher working with the University of Edinburgh began vaccinating domestic dogs in heavily populated areas outside the Serengeti, in the hope of minimizing the impact this reservoir of the disease might have on wild dog populations. We don’t know how effective this has been. 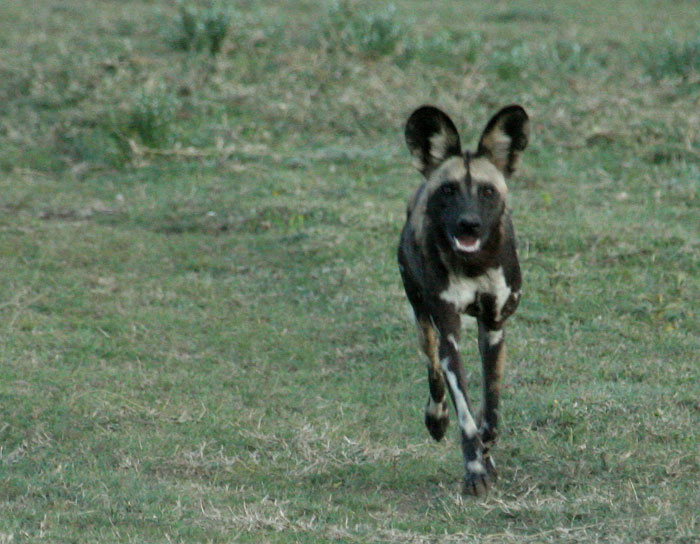 However during the last two years I have been lucky the see these fascinating animals in the Serengeti Plains again! Last year I had one poor sighting, although folks camped in the area had seen wild dogs fairly frequently. This year each time I have been in the area I have seen the pack! That is three times since the end of December 2006! This is incredibly exciting and is wonderful news for the Serengeti ecosystem! Firstly they are wonderful animals to watch, being very social, and providing all members of the pack with food, often giving the weaker and younger members priority (unlike lions). Secondly it is a very positive sign showing the great importance of maintaining huge protected areas. The Serengeti ecosystem comprises various bordering national parks and reserves and covers a total area of about 25,000 sq kilometres.

The last time I saw these animals was on 12th March 2007 when my safari guests from California and guides Dave Christensen, Ole Kirimbai and I witnessed the pack make chase and kill two wildebeest calves. Ten minutes later two of the dogs hunted again and got another calf! The efficiency and speed which they achieve on these hunts is impressive. Unfortunately this happened at dusk so the quality of the photos is not the best, but hopefully you get an idea.

For more information on African wild dogs visit Animal Info. If you have sighted wild dogs or any other rare predator in the Serengeti recently visit the Tanzania Carnivore Project.