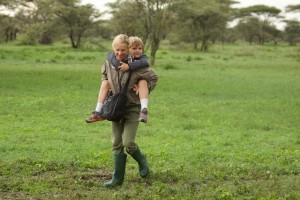 As we finished lunch we could see a massive hazy cloud approaching. It didn’t look very dark or dense, but a gust of wind arrived as I was walking to my tent. In Africa a gust of wind often precedes a storm.

I hadn’t even arrived at my tent before the storm hit. Sheets of rain pelted down, it began to get dark, and thunder and lightning roared and flickered overhead. There was so much rain that I just shut my guide’s tent door and had a nap! 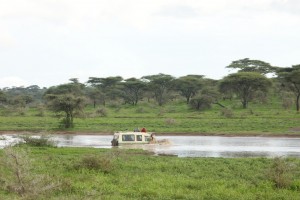 We met in the lounge tent for tea after the rain. The sun was shining, the birds were singing, and pools of water were everywhere. The skies seemed a massive artistic canvas of crystal clear shades of azures, interspersed with dramatic towers of angry and restless grey and white clouds in the distance. The rubber boots supplied in the tents were very handy!

After tea we left for the afternoon drive – perhaps my favorite time of day, as the colors only get better as the drive continues. The tiny stream below camp was now a rushing river, which we had to ford. 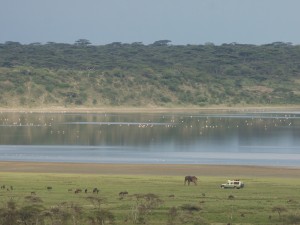 We continued in search of lions we had seen hiding in a bush on the way to camp, but when we approached the lake, we saw a magnificent bull elephant ambling along the lakeshore. We then came across several dens of bat-eared foxes while searching for the elusive lions. Then herds of wildebeest and zebra began galloping up the slope from the lake and heading off into the distance – who knows where? They seemed delighted with the rain, and were probably headed out onto the Plains, now that water was so abundant. 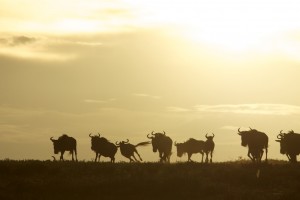 The light and the scene of the moving herds were so amazing that we opened up some beers and relaxed sitting on the roofs of the Land-cruisers, enjoying the spectacle around us, compounded with the thundering of hooves, and the competing singing of larks and ring-necked doves. 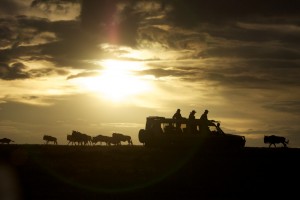 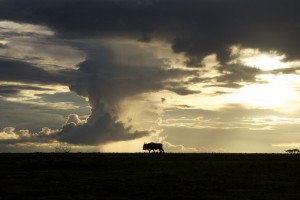