I am amazed that, even though I have been in the bush for over twenty five years, I am often surprised by new sightings and experiences. In June I was on safari .....

I am amazed that, even though I have been in the bush for over twenty five years, I am often surprised by new sightings and experiences. 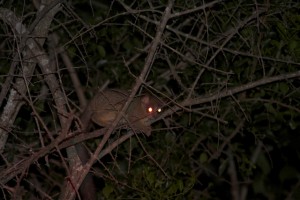 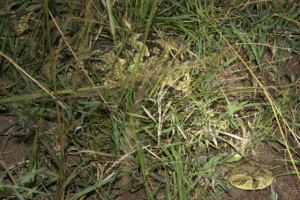 In June I was on safari with Victor Lopez-Balboa and his sons, Andrew and William, from New York City. One evening while doing a night drive in Ololosokwan, which is in Maasai village land on the edge of the Serengeti, we encountered a pair of lesser bush-babies (Galagos).

This pair of bush-babies paid no attention to us at all, even when we approached to within five meters of the small Acacia tree in which they were sitting. They were looking down at the ground directly below the tree, and shouting in high pitched chatters. Their total disregard for us meant that their attentions were focused on a much more imminent threat. I scanned the grass below the tree with a spotlight, but could not see anything, so I got out of the vehicle with my flashlight to find a huge snake, a puff adder, lying in the grass. Its camouflage concealed it very well indeed. The bush-babies were warning anyone in the neighborhood of the nearby threat. This behaviour is called “mobbing”, and although I have often seen birds mobbing snakes, and jackals mobbing large predators like lions or leopards, this was the first time I had seen bush-babies mob anything. 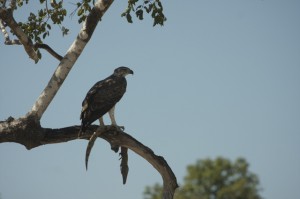 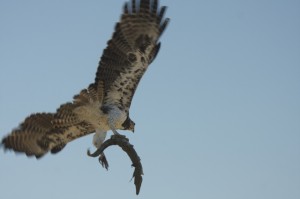 Soon afterwards we were in the Selous Game Reserve. While on a morning game drive, we came across a Martial eagle sitting in a tree with a kill in its talons. The Martial eagle is one of Africa’s biggest eagles, weighing about eleven pounds. I assumed that the eagle might have a large Nile monitor lizard in its talons, but as we got nearer I realised that this bird actually had a young crocodile which was about three foot long. I was extremely excited as I have never seen a Martial eagle eating a crocodile before. After a couple of minutes of us observing the eagle, he decided that we might covet his prize, so he flew off to another tree to enjoy his meal in peace.

On the second to last day of the safari, also in the Selous, I saw another thing that I have never seen before –  a Zambezi soft-shelled turtle. This beautiful turtle has a shell which is not covered in scales like other turtles and terrapins, but with a very smooth skin.  When we approached closely to take his photograph he peered at us with his bright yellow eyes, before pulling his long pointed tubular nose into his shell and closing the front with a flap. We moved away a little and after a while, when he felt it was safe, the turtle retreated into the thickets beside the river. 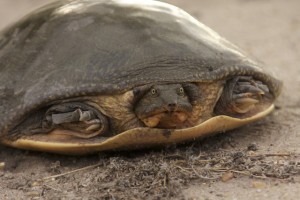