In the distance, a vulture was landing in the midst of a thicket below a rain tree. Nearby we noticed a lioness with two cubs. She seemed preoccupied and focussed, heading in the direction of the rain tree.

We had just arrived in Tanzania’s largest national park – Ruaha, from its largest Game Reserve – Selous. We had had a wonderful time at the new luxury Kiba Point lodge in the Selous. The lodge was idyllic, and the Selous is a fantastic place to walk, game drive, explore the Rufiji River by boat, and swim in hot springs. Aside from seeing lots of hippos, crocs, and various antelope, our highlights were probably finding wild dogs, and spotting a southern banded snake-eagle.

Anyway, having just arrived in the much drier Ruaha national park,

we went on an afternoon game drive, as the sun’s rays illuminated the landscape in a soft orange glow. We drove along the Mwagusi sand river, with its Tamarind and doum palm lined banks. As we left the valley, we entered bush dominated by toothbrush combretum and massive gnarled baobab trees.

In the distance, a vulture was landing in the midst of a thicket below a rain tree. Nearby we noticed a lioness with two cubs, perhaps 3 months old (one was much smaller, but was almost definitely the other’s contemporary). She seemed preoccupied and focussed, heading in the direction of the rain tree. We followed her in the open Land-Cruiser. Then we saw another lioness coming towards them. She paused to greet her pride companion and the cubs, and then turned around and headed back whence she had come.

Of course, we were wondering what was going on near that tree.

We saw another vulture land there. Then, as we approached we saw scores of vultures in various trees nearby, including the ubiquitous white-backed vultures, and the smaller hooded vultures. These have a habit of following lions, and picking “goodies” from their excrement, as well as cleaning up kills. Our senses were keen to every sound, smell and flicker of movement.

We found nothing but vultures as we approached the rain tree, so we circled around the nearby combretum bush.

We then began bumping into lions. One under that bush, two here, some cubs there, four sub-adults lounging together there… In all we found about sixteen lions! Soon after that we found the kill.

attracted the rest of the lions, who had been digesting their last course. They cautiously walked within feet of our vehicle. Next, the carcass was crawling with lions, all over it, and the noise, the growls, and squeals of competition became all encompassing. Meanwhile the orange glow of dusk deepened.

This cacophony attracted the attention of a breeding herd of elephants who were passing nearby. They don’t see well, but have keen hearing and smell. Not liking the idea that lions were near their young, and wanting to maintain a psychological advantage over these predators that specialize in big prey, the matriarch and the larger females began to charge towards the lions (and us). We watched as some scattered, and others played a game of chicken, retreating in stages, again right past our vehicle. The noise of growls and trumpeting was invigourating. 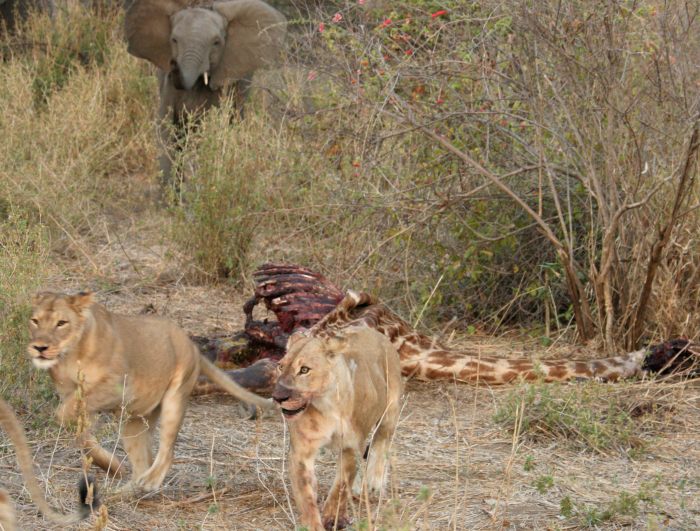 The elepants then moved on, and we stayed to watch our hungry cubs crawl out of a thicket, and return to the kill. As we turned the vehicle to set off back to camp, some of the rest of the pride, including a big male we hadn’t seen until now, were silhouetted by the ruddy glow of this African sunset.

This was, remember, our first afternoon in Ruaha!