We left Mombo Camp with a plan to find roaring lions we had heard from the camp at dawn, with Callum, our Mombo Camp guide. 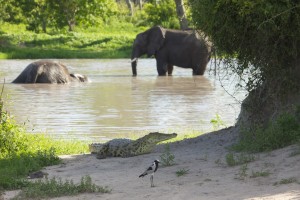 However soon after leaving camp we encountered a couple of breeding herd of elephants. They were moving quite quickly, eager to get somewhere. 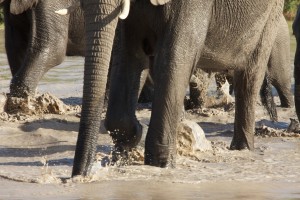 There was a waterhole in the direction they were headed, and so Cullum drove there and parked the car in the shade. A crocodile basking on the bank slipped into the water, as two young bull elephants began to play fight, to escape the commotion.

Soon afterwards the breeding herds arrived, and we watched and listened as they rumbled and roared in excitement, sloshing into the water.  They had no idea we were there. As they left, they passed right by the vehicle, pausing to sniff us as they went. 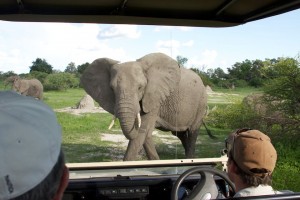 We watched in awe, and had totally forgotten about the lion quest!