In Arusha national park Dave and our guests canoed around Momella lake during the afternoon, sneaking up to buffaloes, and watching crowned cranes in their courtship rituals. On our way back to camp at dusk we encountered three young hyenas lying in the road. 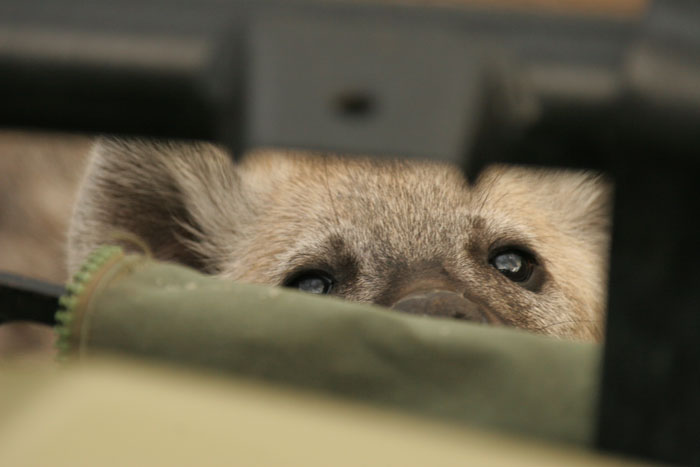 They looked very endearing as they peered at us. They were so inquisitive they would sniff the air, and then inch forward towards the Land-Cruiser. At one point the bravest of the three started sniffing the jack, and I got a photo of her peering through the bull bar at me.

One morning in Manyara a flock of guinea fowl chattered and scurried through the bush, followed by a caracal which leaped after them, and then dashed into a thicket upon spying us.

rther west on our way to camp in the Serengeti two shy male cheetah had attempted to hunt a Thomson’s gazelle. They then climbed high into an acacia to enjoy an afternoon breeze, and who knows, scan the views across the Plains? A couple of days later we found the same two cheetah minutes after they had brought down a wildebeest. We watched them feast, pausing every now and then to check the skies for signs of vultures, and the valley for other predators.

That same morning we had seen jackals and vultures on another kill. The competition among the jackals grew intense.

After the cheetahs I couldn’t resist taking a photo of a regal looking Tawny eagle peering down at me from above. I even saw a couple of aardwolves in the Plains near camp, where lions roared nightly.

These are just snippets and glimpses of hundreds of moments we witnessed over the two weeks of our journey from Arusha to the Serengeti.

It is a wonderful feeling to be able to spend so much time in areas nearly untouched by Man and to watch one after another interaction in nature, and it was a pleasure to share these sights with a fun and compatible group from the San Francisco area.