As we turned off the main road just after the little town of Karatu, we were greeted by “The Mogul Highway “. Ron and Sherri Adams had never before had the experience of sitting in a car seat and doing a full aerobics class all at the same time. After an hour and a half of bone shaking roads, we had an hour of well maintained dirt before reaching the shores of Lake Eyasi, our home for the next few days, and access to some local tribes with cultures as rich as they come.

Tanzania has more than one hundred and twenty different tribes within its borders. This area westwards from the small town of Karatu to Lake Eyasi and southwards including the Yaeda Valley is one of the few places where all four major African language groups are spoken.
While most people are familiar with the Maasai, there are other tribes living nearby that have very rich cultures, but have resisted western influences to a far greater extent than they. Two of these tribes are the Datooga (also known as the Taturu and Barabaig) and the Hadzabe. 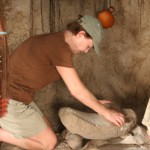 As we arrived at the Datooga village, we were greeted by a blacksmith and his three wives. They graciously opened up their lives and home to us, and afforded us an opportunity to learn about their way of life and culture. When his younger wife was grinding maze, she asked Sherri if she wanted to try her hand at the task, and Sherri rose to the occasion. There was much laughter and excitement while the young wife helped Sherri perform her task the correct way, and all barriers broke down. This led to great interaction, and an opportunity to learn from a living museum.

The Datooga are a pastoralist people whose culture largely resembles that of the Maasai, but who have recently diversified their economic activities to include agriculture. They are a proud people with a reputation as fierce warriors. They have a strong desire to maintain traditional beliefs and practices, which means that as a result they resist education and western type development. 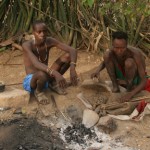 While the men’s dress resemble that of the Maasai, Datooga women wear beaded patched leather dresses, and adorn themselves with brass bracelets and incredible single piece brass necklaces. Some women have circular patterns tattooed around their eyes; this is adornment at its best. The brasswork is made by the local blacksmith whose skills are passed down from one generation to the next.
The village blacksmith also provides the Hadzabe people in the area with their arrow heads. As the Hadzabe people only live on subsistence hunting, arrowheads are probably traded for meat from animals that they have hunted. Eating wild animals is generally taboo in the Datooga culture, but the blacksmiths being somewhat outcasts, have no problem with eating the meat of a 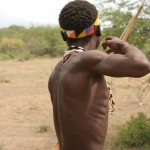 We spent a morning with a hunting party of Hadzabe Bushmen – two men and three boys, who looked no more than about ten years old. The Hadzabe are skilled bowmen shooting anything from birds, squirrels, monkeys, baboons, small antelope like dik dik, up to animals the size of buffalo or giraffe.

These people live in tune with nature, as they rely totally on the environment for all their needs, including food, shelter and medicine. The bush is their classroom, as they generally resist all forms of modern education and development, and most of these people have never been to school or visited a medical practitioner in times of ill health. 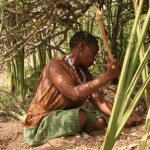 The afternoon was spent gathering roots and tubers with the women of the village. As we meandered through the harsh dry bush, one woman stopped, and the little dry twig sticking out of the ground was her queue to start digging. A few minutes later we were holding a bunch of tubers in our hand which were not only edible, they were full of water.

Like all Bushmen-type people who struggle to maintain an ancient way of life (usually in very marginal areas), the main threat to their survival lies with the encroachment of their traditional hunting grounds. This occurs either by governments declaring them unable to hunt in what are now “protected areas” for tourism, like the Ngorongoro conservation area and the Serengeti, or by neighboring tribes such as the Barabaig and Maasai encroaching on their hunting grounds with agriculture and livestock, and by keeping wild animals away from waterholes. 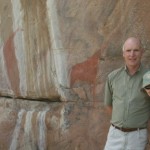 While visiting the Maasai in the Loliondo area we were very privileged to be able to see some rock paintings which included pictures of antelope and giraffe. These paintings are of Bushmen origin and possibly of an era when the Hadzabe or their ancestors roamed this area.