We departed camp early and were almost immediately greeted by a herd of more than a thousand wildebeest. Lines of more wildebeest rolled in, and the restless herd moved up and down the northern bank of the Mara River, stopping at strategic places to assess whether it was safe or not to cross. A crocodile or some other invisible obstruction kept the herds moving to and fro.

After a couple of hours they settled down, while more kept filing in, and the herd kept growing – bunching what had become about three thousand wildebeest up against the river bank. 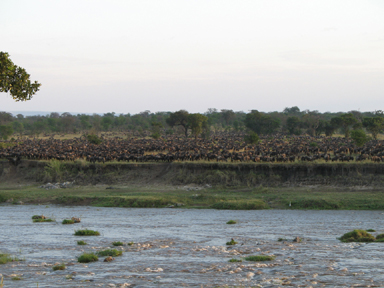 Roberta Guillory and I sat in the vehicle hidden behind some bushes, waiting for the first animal to start crossing. As the pressure from behind kept mounting, the wildebeest again began to get a bit restless, and eventually it happened…… someone took the plunge!

Within seconds the herd mentality took over – and wildebeest started spilling over the high bank and crossing the croc-infested Mara River. 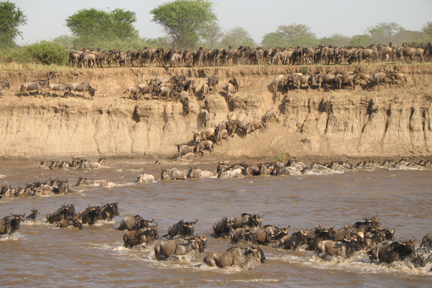 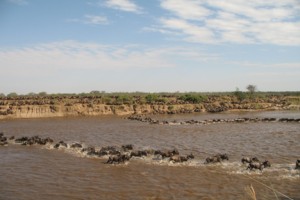 We moved forward and hid the vehicle behind some bushes near the bank so as not to disturb the wildebeest getting out of the water just upstream form our position.

As we sat on the edge of the river bank enjoying the spectacle, the plaintive cry of a wildebeest being caught by a lioness attracted our attention.

As we stood up and turned around we saw a lion and a lioness each with a wildebeest in their grip about thirty yards away. 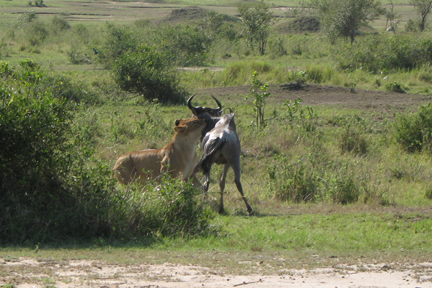 A croc caught a wildebeest in the river and effortlessly dragged it under the water to drown it, only to share it with about four other crocs about half an hour later……… and all this before breakfast!