When we arrived at Moru Kopjes in the Serengeti national 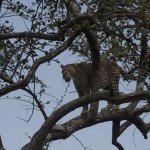 park on the 2nd of June the wildebeest migration had already left the area. This proved to be a blessing in disguise, as there were very few other safari vehicles in the area, and we were left almost alone to enjoy some rather spectacular wildlife viewing.

One of the main 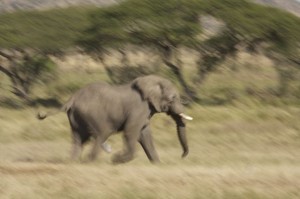 highlights of the whole safari was one morning when we had just left a pride of fourteen lions, including ten cubs, lying up on a large granite whaleback. We came across several groups of elephant scattered across the plains and along the Ngamalyak River. 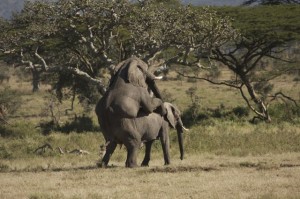 We then noticed some agitated behavior in one of the groups, and some of the elephants started running. One large bull started pursuing a female at high speed. After about a hundred yards he caught up with her, and she finally gave in, allowing him to mate with her. Elephant mating is something you seldom see, as it often takes place in thick bush. We laughed as it became clear to us that even with elephants, the ladies act hard to get, and the males have to do all the running!