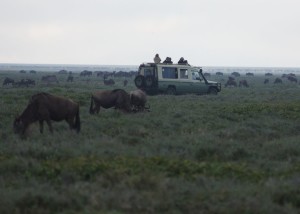 morning we had driven across the Plains through herds of wildebeest and zebra. Day and week old wildebeest calves were everywhere. Prey was so abundant and widespread that it was hard to imagine any predator going hungry.

We came across a mother cheetah and her four large cubs eating a zebra foal. The cubs must have been nearly a year old, so this mother had achieved no small feat to have so many thriving large cubs. 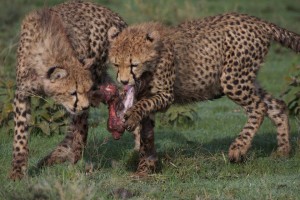 The cub mortality rate for cheetah in the Serengeti is about 95%!

Threats to the young include attack by other big predators, harassment by gangs of male cheetahs, having kills stolen by competitors, and of course finding a meal. However I would guess that the last was probably the least evident to us as we watched them feasting on that zebra foal, surrounded by so much wildlife.

In the end they finished their meal, and began playing with a leg. Vultures had landed and were waiting nearby.  Soon vultures landed on the remains, and we witnessed the young cheetahs having fun chasing them off the kill. 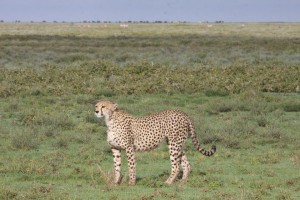 Large predators often investigate when vultures are seen to land. This prompted the mother to start moving away. Two jackals arrived, and we assumed they would head to the zebra kill, but they soon stood upright and began barking at the cheetah, creating noise and more attention.

We think the mother may have spotted the jackal’s cubs in the distance when she was checking to see if any other predators, such as lions or hyenas, were around, as she and her cubs headed in that direction. The jackal parents began barking more frantically, and following the cheetah as they departed. We could hear the jack 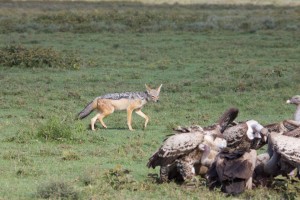 al yelps more than a kilometre away, so the risk of them being noticed by lions or hyenas was significant, and they were successful in moving the cheetah away from their den.

Meanwhile vultures rushed to the carcass, squawking, squabbling, and cleaning up the remains.