Namibia is the most arid African country south of the Sahara – not necessarily the sort of place that conjures up images of a destination for great safaris…….. But it is! Southern African deserts boast the richest diversity of life of all the world’s deserts……….no less than 204 species of vertebrates are endemic. I recently conducted a safari in Namibia for the Geigert family from San Diego.Having been to Africa several times before, John decided to do Namibia because of the incredible photographic opportunities provided by these arid but varied landscapes. 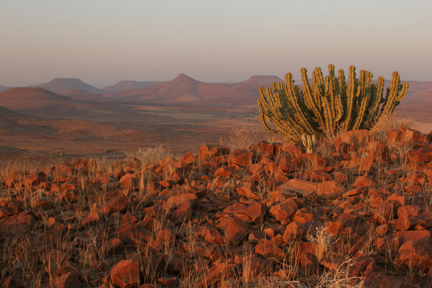 A couple of days spent in Swakopmund were a great way to get over Jet lag. We did a full day excursion to Sandwich harbour in the Namib – Naukluft Park. Sandwich Harbour was formerly a commercial Whaling port, which ceased to exist as the harbour silted up. Now the freshwater wetlands and mudflats of Sandwich Harbour are internationally important habitats for migratory waders, shorebirds and flamingos. The sight of jackals on the beach and flamingos feeding in the surf were sights to be remembered. After exploring the coast line, we drove into the sand dunes a little way to study the incredible array of life forms that are specially adapted to surviving in such harsh conditions. This is an experience that leaves you in awe of how incredible and powerful nature is.

Our next stop was Serra Cafema camp on the banks of the Kunene River.This is possibly one of the most remote camps in Africa. The Kunene River is a powerful river forming the border between Angola and Namibia and is the only permanent source of water in the area. One of the highlights was visiting a village of Himba people, some of the last remaining truly nomadic people in Africa. The Himbas’ ability to survive let alone live a pastoralist lifestyle in these conditions was humbling. It was particularly interesting to see the similarities and differences between the Himba and some of the other Nilotic tribes like the Maasai. Quad biking allows you to go where a land rover cannot, and also allows you to “tread lightly” so as not to cause damage to the fragile desert environment. The breathtaking scenery punctuated with gemsbok (oryx) or the occasional springbok, made for incredible photo opportunities.We cruised the river by boat, searching the reed beds for birds and the sandbanks for crocodiles, and we walked along its banks studying the fascinating geology and looking for the life around it.

At Palmwag Rhino camp in Damaraland we were able to see the endemic Hartmann’s mountain zebra as well as giraffe, gemsbok and springbok. The two days we spent here we were fortunate enough to find five black rhinos and a small group of desert adapted elephants.

Our next stop was Okonjima bush suite – a world class lodge (with world class cuisine!) Okonjima is part of the Africat Foundation, which is a non profit organization dedicated to saving and rehabilitating large carnivores in Namibia. The Africat Foundation situated on a 55000 acre conservancy, has saved over 900 cheetah and leopards in the last 14 years of which 85% have been released back into the wild in safe areas.About 25% of the world’s cheetah are in Namibia and about 90% of these cheetahs live on farmland, where they are often persecuted because of their conflict with farmers and their livestock. The Africat foundation has therefore saved a percentage of the world’s cheetah population.This unique place gave us the opportunity to learn intricate details about carnivore conservation and to track leopard and cheetah that had been fitted with radio collars for monitoring before they are released back into the wild.

The conservancy also offers great opportunity for birdwatching, with many Namibian endemics as well as the opportunity to photograph other animals in the wild, like greater kudu, red hartebeest, wildebeest, impala, steenbok, and porcupines etc as well as some great close encounters with cheetah, lion and leopard. 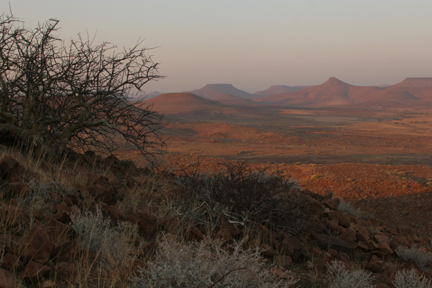 Our Final stop was Sossusvlei. We spent a couple of nights in Little Kulala, a lodge just outside the Namib – Naukluft Park. Sossusvlei is known for the biggest sand dunes in the world. Evenings and early mornings gave phenomenal photographic opportunities as the colours and shadows constantly changed with the altering angle of the sun. The first evening we climbed dune 45 in preparation for climbing Big Daddy the following morning. A very early departure ensured we were in the park before sunrise to get the best light on the dunes. Big Daddy is the world’s second biggest sand dune and is 374 meters high, (1227ft) the biggest being dune 7 which is 447 meters high (1466ft).

It is hard to believe that sand can be so beautiful, and the breathtaking scenery of the dunes and the photographic opportunities we had there, were unparalleled. The climb up Big Daddy took us about one and a half hours – this allowed us to stop en route and enjoy the beauty all around us. Every new angle gave us a different perspective. The descent took us about fifteen minutes as we ran down the dune slip face, listening to the dune roaring as the sand shifted beneath our feet.

A walk through dead vlei was a spiritual experience; the stark beauty of this place was astounding, causing the mind to wonder how beautiful it must have been as a living river before it was strangled to death by the powerful forces of nature and the shifting sand dunes. A hearty picnic brunch set on a table under the shade of tree was welcomed by us all after the fun filled morning.