Nature is often seemingly extremely harsh or cruel, but putting our values onto Mother Nature is meaningless. Nature has a way, through every action that takes place naturally, of keeping a perfect balance and order of things.

On a recent safari we were on a game- 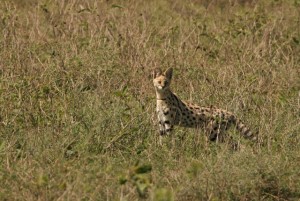 drive in the northern Serengeti, watching a small pride of lions, when we saw one of the lionesses showing intense interest in something in a patch of long grass. As we watched for a while, trying to ascertain what had caught her interest, we saw a serval cat run off to the left of the lioness and stand exposed in a small opening. The lioness must have seen the serval.

We watched to see if the lioness would notice the small spotted cat standing in the open, and we saw the lioness jumping into the long grass as if trying and find it.

It was only then that I realized that the serval did not turn and run away like she should be doing. She must have had kittens in the grass and was trying to catch the lionesses attention to lead her away from her young, hidi 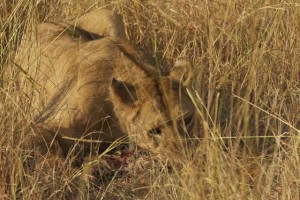 ng in the grass.

The lioness then jumped into the long grass, the way a cat does to catch a mouse, and it was apparent that she had caught one of the young servals.  As we approached her, she played with the baby serval between her paws.  It was tangled in strands of long grass.

She bit and shook the baby serval one 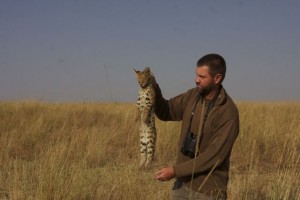 more time, before dropping it in the grass and moving off a little way.  She then lay there and watched us, as we investigated the crime scene.

Predators have an inherent hatred for other predators, and will kill each other or their young at any given opportunity.

We were witness to what seemed to us like a meaningless event, but this is just another way that nature keeps things in balance!