The African Wild Dog is one of Africa’s rarest large predators. Although they may look a little thin and sometimes mangy, I have a great deal of respect for these much maligned animals. I hoped to see them in March when I was on 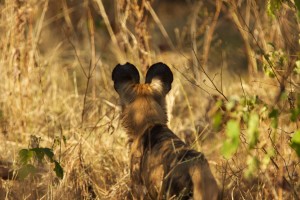 safari on the Serengeti Plains (Tanzania), but we had no luck.

I am now back in Africa, this time in the Okavango Delta (Botswana), with the Rileys and Senfts from Canada. They had just stayed at Mombo Camp, renowned for its outstanding wildlife, including almost all the major predators. However even there Wild Dog sightings have become infrequent, except for an anomaly – a lone Wild Dog who has teamed up with a pair of Black-backed Jackals, and who my safari guests did see!

Botswanan guide Emang and I met our group at the Vumbura airstrip. Vumbura Plains Camp is a hop by air north of Mombo. Rod, Jeannie, Sandy and Debbie were so excited when they saw us, and they described all the wonderful sightings they had seen in Mombo Camp. They had seen all the big five except rhino, and lots more. Their leopard sighting was outstanding, made even better because Rod spotted it first! That was wonderful, and just what I hoped when we designed the itinerary, but how were Emang and I going to top this? 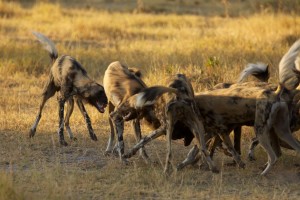 That afternoon we left for a game drive. We drove about 2 kilometres from camp when we saw an eagle in a tree, and drove off to get a better look at it. While there we spotted Wild Dogs lying in the shade!

At 4pm it was still quite hot. They were having their siesta, so we saw only 5 dogs, and little more than the flick of a tail, but it was exciting to see such a rare predator.  We decided to wait and watch them wake up and become more active. 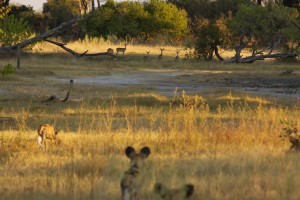 We must have waited about an hour before suddenly the alpha male got up. The whole pack of 15 then appeared in the open and immediately began an active greeting ceremony, by wagging their tails, crouching, whimpering, and generally re-affirming their lower rank to those above them.

Soon after that they began looking for prey. A herd of zebra and wildebeest were keeping a good eye on them. Minutes later we saw the dogs looking at some impala who had spotted them and were on high alert, with their ears open wide, and facing the dogs. 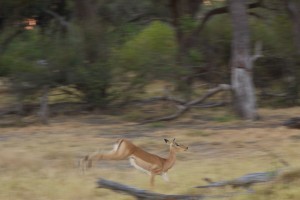 A moment later chaos erupted, as the dogs stalked and then charged towards them the impala snorted, and were then leaping and fleeing in all directions. Emang started the car and rushed us closer to the scene. We stopped next to the majority of the pack, who were waiting to see which way they should go, while we saw others pursue impala in two different directions. The camp had radioed us to say that a dog had chased an impala right through camp and back into the bush!

The impala had scattered. Wild Dogs would normally pick a 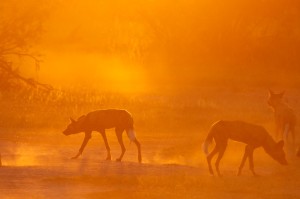 n animal and chase it until it tires. They often run long distances in these hunts.  Here in the Okavango, many areas are covered in water, and this creates a limit to how far the hunts can go. Impala will avoid the water, and keep to the bush where they may be able to confuse the dogs or hide. If they run into the water, they will tire quickly, and need to watch for crocodiles.  The dogs will also follow them there, so that is no escape. To avoid being caught the impala must confuse the dogs by scattering and heading into the thicker bush, preventing the dogs from singling out an individual. 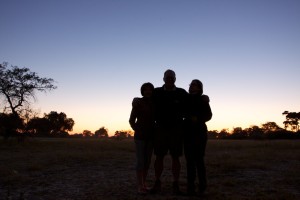 It was becoming dark, and dogs were still on the alert looking for one of the chase dogs or a loose impala, but they would soon lie down for the night. We found a spot nearby for a gin and tonic as the sun set, listening to the tinkling of the frogs, and the bark of a jackal. That was a good start for our first afternoon here. Perhaps the Vumbura area would match Mombo in wildlife spectacles?