We had left the lush green swamps of the Okavango Delta a day before. 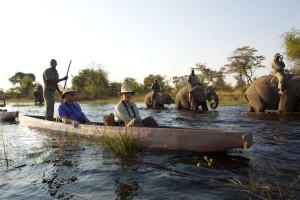 One of the last activities we did there was riding in a mokoro alongside a family of African elephants. We were poled through the channel, gliding an arm’s length from the elephants, as they sloshed their way towards camp.

When, the following day, we landed at an airstrip in Damaraland, in northern Namibia the contrast between the two could not have been more marked.

To start with there was no sign of water.  The few plants that existed were scattered far apart. Only in drainage lines (called rivers here!) could we find plants crowded together, hoping to get the first drop of water when it arrived, even though it had not rained here in two years. There was no sign of rain, and none was remotely likely until January next year. 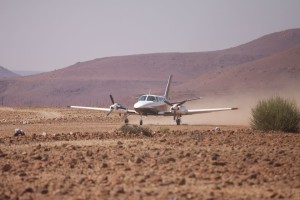 The most obvious feature upon our arrival, other than heat (even though it is winter), were the rocks, and there were plenty of them. The Serengeti features wildebeest in such numbers that they seem to fill all the space in your field of view, but here rocks do – millions of them! Red, rough rocks contrast with a clear blue brilliant sky. So why had we come here? Don’t we go on safari to see animals? We actually came here hoping to see desert adapted black rhino.

Whenever you arrive in a new place the first hour or so is taken up adjusting to the different environment. We get comfortable by adding or peeling off layers of clothing. We drink water, and feel the breeze, or the cold, or the heat. And then, especially in Africa, we start to absorb the surroundings. 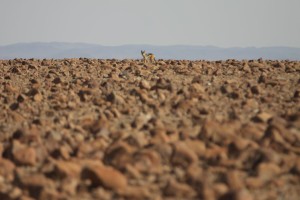 Here, that involved looking at this harsh moonscape, and becoming acutely aware how tough it must be to survive here. Once we became used to the heat and the ubiquitous rocks, we then looked more in depth. At this point I would say that we had accomplished the first stage of adjustment.

The next thing that we noticed, which we now focused on intensely, were the plants. They may be sparsely spread out, but they were everywhere. Some resembled dry sticks, skeletons of life waiting for rain, others had lush green leaves, and seemed to be thriving. Two species in particular appeared to be doing extremely well – the Damara Milkbush (Euphorbia damarana) and the extraordinary Welwitschia plant (Welwitschia 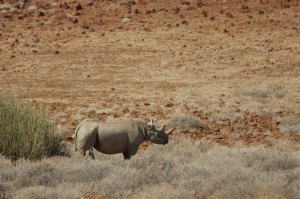 mirabilis). We wondered how they survive here, and more surprisingly, how they thrive?

After marveling at the hardy and healthy appearance of these plants, we started to spot wildlife. We saw mammals, insects, birds, reptiles.  Nothing escaped our attention!  We were especially astounded at the abundance of Hartmann’s mountain zebras. And we did achieve our main goal, seeing a mother rhino and her calf, and the following day a lone male rhino. This is the only area in the world where you can still see black rhino in an unfenced wild area. We also saw lions, which is relatively unusual. 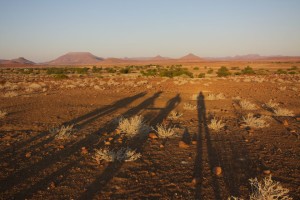 However if I were to list what we saw (steenbok, springbok, ground squirrels, snake eagles, vultures, et cetera), it would seem ridiculous compared to what you can see in other parts of Africa.

What is amazing here is not how many animals we see, but the experience of being here.

We are overcome by the silence, and as our senses become more acute, hearing the faintest trill, sifting through the harshness and noticing the tiniest movement, we become far more attuned than in other places to life, simply because anything that lives here stands out so much – because it is alive.