I hoped that my safari guests would appreciate what was to come - staying in a mobile camp in Maasailand. 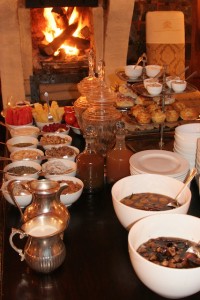 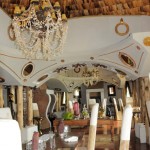 The last few days had been packed with adventure, wildlife sightings, the smells and sensations of Third World hustle, bustle and chaos in the towns, blended with the aromas and sounds of an atavistic African bush. It was hard to imagine that we had only been traveling together for three full days. Yesterday we had seen a phenomenal amount of wildlife, with astounding backdrops in Ngorongoro Crater, and we had enjoyed as much luxury as one could imagine existed in Africa. Would the adventures ahead keep up with the experiences we had already had?  I hoped that my safari guests, the Everdells, would appreciate what was to come – staying in a mobile camp in Maasailand.

The modern vehicle is an amazingly convenient invention, allowing us to get from one place to another in general comfort and with relative ease. We even had a refrigerator in the car stocked with icy drinks – Cokes, water and beers! In a few hours we were sailing past shimmering and flickering gazelles in the Plains. However, not even modern rubber seals and dustproofing in our custom safari Land-Cruisers could keep this African dust out, and soon we resembled desert Arabs, following a dirt track that seemed to head nowhere. Explorer and adventurer Wilfred Thesiger hated the automobile, with its noise and capacity to transport the city dweller to the wildest places with minimum effort, skipping two of the ingredients that he considered essential to appreciate the wilds and nature – quiet and the passage of time.  In the afternoon I thought we needed a change, and we abandoned the cars and continued on foot along the dirt track. 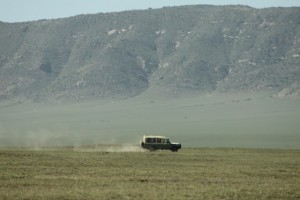 Immediately the quiet engulfed us. A slight breeze blew across our faces, and the silence was interspersed with the occasional warble of a lark.  We felt as if we were some whispy seeds leaving the last dandelion, and a breeze had blown us over an arid amber ocean.  We were tiny insignificant specks crossing a vast plain. We came to a drop off, and could see Ol Donyo Lengai (“The Mounatin of God” to the Maasai), an active volcano, in the distance, rising sharp and vertical, forcing anyone who could see to notice. 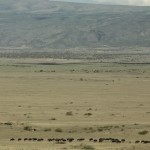 A long line of migrating wildebeest was on the march below us, heading south, looking for water and greener pastures. They looked tired and weary, and seemed tiny, like ants, unimportant, easily forgotten –  us.

We got back into the safari cars, and were soon in camp. The tents were placed beside a dry river bed banked with shady acacias, overlooking a wide plain and the volcano that demanded your attention. Donkeys hee-hawed and trotted by, followed by a Maasai herder. Fat-tailed sheep were grazing. The tinkle of cowbells could be herd around, and the cooing of doves. Colorful white-throated bee-eaters were everywhere feasting on insects caught in the wind eddies, created by the trees and the dip in the river. 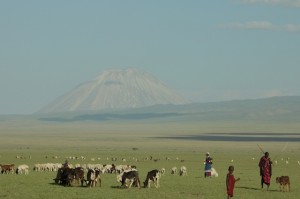 We went for a stroll, bird-watching and soaking up the views and the cooler air. We conversed with some Maasai women, who were amazed at the binoculars and cameras and, laughing, asked for a photo, and then invited us to their village. 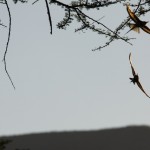 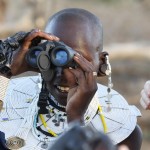 It seemed strange that despite the large numbers of sheep and goats nearby, there were so few flies. Flies are usually abundant wherever there are lots of livestock, as they lay their eggs in their dung. The larvae feast on the droppings, multiplying in a short space of time. However thousands of dung-beetles also seek out animal droppings and, rushing to beat the competition, rapidly roll it into balls and bury it. Amazingly these beetles are also hosts to tiny mites that live on them, and feast on fly larvae. On our walk we saw countless dung beetles flying around and, using their specialized antennae and acute sense of smell, they were easily able to locate any fresh pile of dung. We marvelled at the intricacy of this web of relationships – one out of millions going on around us, resulting in an environment that made it tough even for flies to thrive! 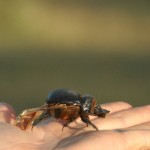 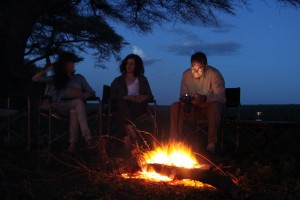 We returned to camp as night fell, had a hot shower and freshened up, and were soon sitting around the campfire sipping cocktails. The only other lights visible from our camp were the stars. The only sounds were the sounds of the African night – the call of the nightjar, chirp of crickets, and the singing and laughter from the Maasai village. This is Africa!