Gillian and I had been to Uganda before to see the rare mountain gorilla, and this time we decided to travel there to see chimpanzees. 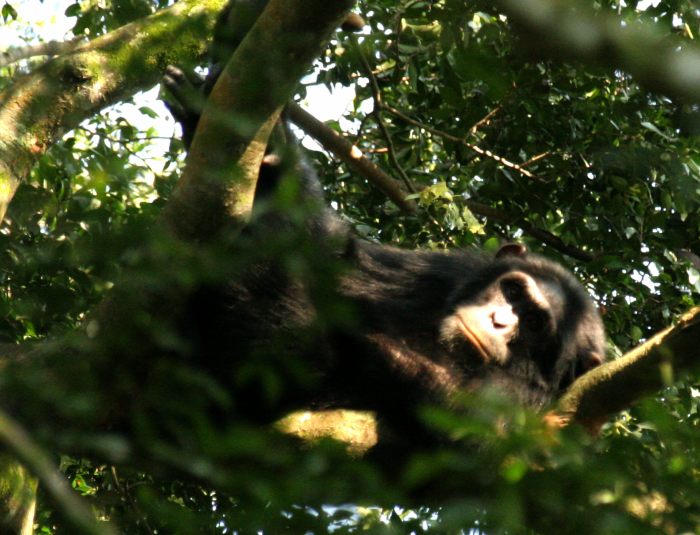 Our first chimp track was at Kibale national park near Fort Portal. Here the Uganda Wildlife Authority (UWA) have habituated three chimpanzee communities to the presence of humans (meaning that while they are wild, they do not run away). Of the three communities, only one community is allocated specifically for tourist viewing. The other two are for researchers studying the chimps.

They allow a total of three tourist groups at a time to set off in the morning, and another three groups in the afternoon. Each tracking group can be no more than six tourists and one national park tracker. Each group is meant to visit the chimps in succession (not at the same time), or visit different chimpanzee groups (a loose term referring to any collection of chimps belonging to one community, which could be mother and child, other relatives, or a group of friends).

We set off at 2pm with our tracker. The forest was really beautiful, lush, dark green, and primeval. We stopped to search for black and white casqued hornbills, which we could hear cawing in the treetops above us. Every now and then we paused to listen for chimps, but heard none. Our tracker communicated with the other trackers in the forest to see if anyone had had a success. We saw some red-tailed monkeys tweeting in the trees. It was amazing to stand still and listen to the sounds of the forest.

Eventually our tracker received a call from a colleague of his, and we arrived at a group of chimps about a quarter of an hour later.

They were high up in the trees, feeding on wild figs. At first we only saw a mother and child, but the longer we stayed, the more we noticed them appearing among the branches. We sat and watched them for a while. Sometimes my neck hurt from craning upwards, and I lay down on the ground, which was wonderful. Eventually they came down, and we followed them through the undergrowth for a short while before we left them to go about their activities.

On our way back to camp, we passed massive buttress-rooted trees and huge fungi growing on them.

The next reserve we visited was the Semliki Valley Wildlife Reserve (Toro-Semliki Game Reserve) further west, sandwiched between the Ruwenzori mountains and Lake Albert, where we stayed at the Semliki Safari Lodge (read the shoebill account earlier).

The chimps here have been studied for about eleven or twelve years, and while they are habituated, they are a lot more shy than those at Kibale. They are often referred to as “savanna chimpanzees” due to their custom of utilising grassland interspersed with open acacia-combretum woodland as well as the riverine gallery forest.

Chimpanzees these days are generally limited to dense forest, but ‘islands’ of chimpanzee communities who wander in larger and poorer territories, usually of mixed vegetation, including pockets of forest in open woodland-savanna grassland still exist. Here we can observe chimps inhabiting one of these rare ‘islands’. The existence of these communities suggests that in the past chimps lived in a larger variety of habitats, and that competition with man is what today limits their range to dense forest. Here is more information on this research project.

Here very few tourists go chimp tracking, and we set off into the forest with chimp researcher Justus and UWA (Uganda Wildlife Authority) ranger James, more or less accompanying them on their normal research activities. We entered a patch of dense riverine forest, some of the trees reaching 40m in height, which straddles the Mugiri River, 100-300m on either side. This forest was really beautiful, and walking quietly through dense vines, listening to the melodic calls of the western nicator and other forest birds, was well worth the odd mosquito bite incurred!

We came across one group of chimps silently feeding on figs in a tree on the boundary with the savanna. These disappeared soon after hearing us approach. We also bumped into a forest elephant feeding in thick vegetation near a small stream! Later we heard pant-hoots, and encountered a larger group of chimps feeding high up in the canopy. We sat below these fellows for about an hour.

What was such fun for Gillian and myself was that they reacted to our presence a lot more than the Kibale chimps. Occasionally they would peer at us, while hiding behind a branch, and they looked really inquisitive. They were also a lot more nervous at our presence and sometimes Justus or James would pant-hoot or grunt to tell them who we were, and not to worry. To me, it was an extremely exciting and rewarding experience.

Overall the two chimp areas were well worth visiting, and were very different from each other. A visitor is almost definitely going to find some of the chimps in Kibale, and will enjoy the forest there with all the red-tailed monkeys and the odd mangabey, but will be in a larger tracking group, and may bump into other groups in search of our primate cousins. The Semliki experience requires quite a bit more luck

finding the chimps, but spending time with dedicated researchers, being in such a special habitat, and watching these chimps react to our presence was phenomenal.

Thank you Justus and James for having us along, and the guys at the Semliki Safari Lodge for making us so comfortable while we were in the area.