Tanzania was a dust bowl just before our safari started ...

Tanzania was a dust bowl just before our safari started in mid December 2009. 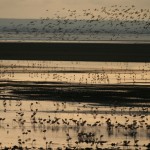 At Lake Manyara, it looked like we would soon be able to walk accross the lake!

Then overnight it rained, and the following evening the lake was full of flamingos!

Later, in the Serengeti, we could see the grassless plain just before it was hit by intense showers. As the first deluge of raindrops hit the ground, a powdery cloud of dust would rise up, a bit like when a puffball mushroom bursts spreading its spores. 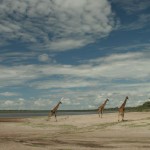 And did we get rain! Literally while we were in the Serengeti Plains, we saw it transform in a matter of days from this dusty wasteland into lush, most, and in some places boggy, fields of bounty!

This meant that the hazy horizons became crystal clear, enabling us to see for miles, and whenever we wanted some entertainment we could always look up into the sky and see changing dramatic cloud formations.