The shoebill (Balaeniceps rex) is a somewhat enigmatic large stork-like bird that is found in swamps between Sudan and Zambia in Africa. While the Ancient Egyptians were familiar with this bird, it was not known to Europeans until the 19th Century.

Because it lives in such inaccessible and remote swamps, and because it is so strange-looking, it has become one of the most sort after species to find by bird enthusiasts.

While in Uganda my wife Gillian, and I were staying at the Semliki Safari Lodge in the far west of Uganda. We had heard that it was possible to see the shoebill in these territories hidden away in the reeds on the shores of Lake Albert.

We set off early in the morning by road with our driver and guide Joseph, for Ntoroko village on the lake shore. This is one of those fishing villages which initially look totally lost in time. Lots of smiling and laughing little kids surrounded us and started chatting in swahili (not knowing that Gillian and I are fluent speakers). Most Ugandans don’t speak swahili, but many of these inhabitants were Congolese. 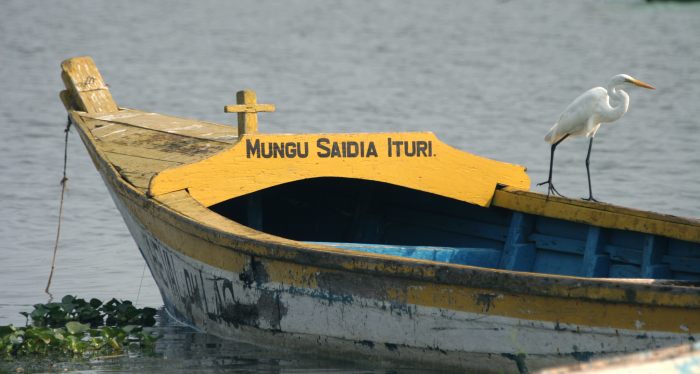 We haggled for a boat, and when we had agreed on a price, the owner set off looking for an engine and some fuel, returning about an hour later. She mustered up a boatman, and we then waited on the shore while the boatman tried to start the engine. This was quite a process, and it looked like the relationship between the boatman and the engine itself was a big component in whether or not it would start. Meanwhile we watched egrets dance and search for fish from derelict boats with wonderful French or Swahili sayings painted on them. One said “Mungu saidia Ituri” – “God help Ituri” (Ituri is a place in the Congo renowned abroad for being home to the rare okapi). Finally the engine spluttered into life, and we set off… in search of the shoebill.

We motored past the docking bay for the little village which turned out to be a bustling port! We could see three or four big trucks loading up with fish to transport who knows where? Rumour has it that most of the fish caught on the Ugandan side of the lake is smuggled into the Congo!

After about half an hour motoring in open waters, we arrived at an area littered with water hyacinth (Eichhornia crassipes) islands.

The scene as our boatman poled his way through the shallow water, and we searched for our enigmatic quarry, was serene and beautiful. The glassy lake surface was interspersed with fishing boats, likewise being punted along, cautiously circumventing pods of hippopotamuses, with the backdrop of the great rift valley towering behind. The hyacinth islands harboured African jacanas (lily trotters), grey-headed gulls, black crakes with their mustard-bills, and other bird life.

The hyacinth has very attractive attractive flowers. It was introduced from South America into the Nile river systems , and has since be

come a real pest. It grows so rapidly that it can cover the surface area of lakes, hindering the passage of boats, and can deprive the water of oxygen, killing a lot of aquatic life including fish. Recently the introduction of a species of South American weevil that feeds on the hyacinth has helped check its spread.

Then some fishermen hailed us “wazungu” (white men) and pointed deep into a papyrus swamp declaring in swahili that our quarry was over there! They obviously had come across eccentric white folk travelling miles to see this stork-looking bird before! 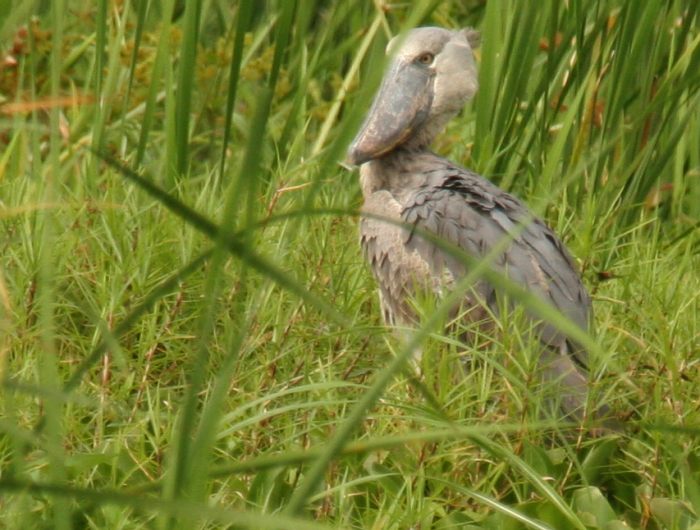 Soon after, I spied my first shoebill standing in the midst of the swamp all alone and looking quite content. It was so exciting to see a bird I had heard so much about for the first time, and to realise how precarious its existence is today, as it thrives in remote swamps. In most of Africa they have been left alone, but as human population increases, demand for well watered areas in an overall dry continent also increases, and the shoebill’s habitat is disturbed. Here on this very lake, the seventh largest in Africa, oil has been found, and a dispute has started between Uganda and the Congo over the exact location of the border. The quiet existence of this bird may well become precarious here, as human activity, and demand for resources, increases.

Visit the Shoebill.org website for more information on this wonderful bird.