The contrast in deep changing colours – reds and russets that turned gold if seen from a different angle. Dunes that were so iron red in some places and so light and cream-coloured in others. The contrast between the reddish colours on these dunes and the crystal clear skies that bordered them. So clear as to seem to have abandoned the atmosphere, and to have multiplied the shades of blue and turquoise to a clean pure bright and deep shade…. a shade you might associate with another planet, not ours. 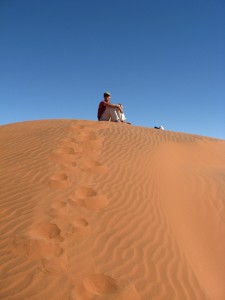 One night we camped out in the desert. I lay out under the stars. What was so overwhelming was the silence.  It was a silence so profound that I could hear and feel the blood pumping in my ears. It was so overwhelming that the slightest whisper or breath of wind would seem a shout or a gale.

The wild parts of Namibia cannot really efficiently be described. They must only be experienced, and for each soul out in that expanse, the sensations of being there are undoubtedly unique.