In February while on safari with Bill Perkins and Evelyn Sandground, we had exceptional predator sightings…

On our descent into Ngorongoro Crater, I decided to drive through Lerai forest to look for some of the Crater’s big tuskers. Instead the sight of three young lions trying to kill a big buffalo bull greeted us. 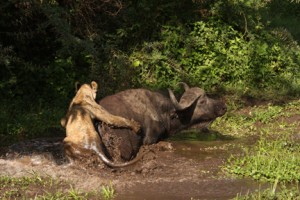 The buffalo bull was standing in the water of a small stream, with a young lioness on his rump with her claws dug into his flanks. As the buffalo moved around the lioness just hung on and moved around with him, making it impossible for him to shake her off. Although it was very harsh and at times difficult to watch, we watched for over an hour. Eventually they succeeded and killed the “brave old man”.

The Serengeti yielded wonderful predator sightings….  We came across a female cheetah and her sub-adult cub trying to hunt amongst a large herd of wildebeest.
Than in the distance we saw two more cheetahs, which boldly and aggressively approached the female and cub. As the two big male cheetah approached, the female tried to slink away and get her cub, that was clearly terrified, away from danger. 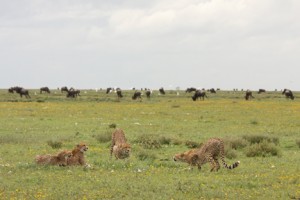 This aggressive behavior would stop, and the cheetahs would all lie together in apparent harmony, and than the fighting would start again. It was interesting that the males did not want to kill the cub, but instead seemed to be soliciting the interest of the female who was probably about to 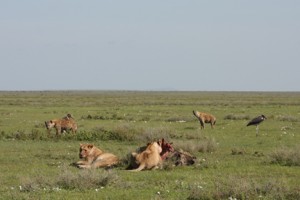 The Serengeti also produced wonderful sightings of lions and hyenas both lazing around and feeding at carcasses, and of course every time there was a kill, there were scores of vultures who arrived to do their “cleaning up” duties.

While lionesses fed at one wildebeest carcass, gathering groups of hyaena tried to intimidate lionessess off their kill. 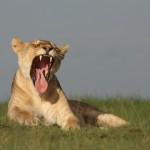 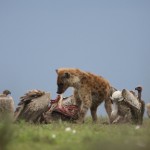