Then another huge column of wildebeest appeared over the horizon and advanced towards the river, and once again they began to mass at the river's edge.

While sipping a delicious Cabernet over lunch on the balcony of the Ngorongoro Crater Lodge, Ro 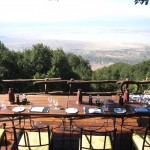 d Senft asked me what I could possibly have in store for them tomorrow that could beat today? We had seen so much in that morning’s game drive, packed with a different sighting every ten minutes, that I would be foolish to promise anything. We had seen gazelles, hartebeests, lions, cheetahs, hippos, elephants, a rhino, buffaloes, ostriches, bustards, vultures, eagles, jackals, hyaenas and so much more. What could I say?

I could only volunteer that while we were unlikely to see so many species in such a short time in the Serengeti, it is a much “wilder” experience. There we might have to scan the grasslands for twitching ears, and it might be a while between sightings, although when we do see things it is often on a grand scale.

The Serengeti is famous for the largest migration of mammals on Earth – The Great Migration of over two million wildebeest, zebra and gazelles. These animals move with the seasons in their search for the best conditions of grasses and water. In the greener months from November to late May they prefer the mineral rich grasses of the Serengeti Plain, but these start to dry up at the end of t 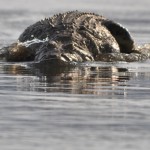 he long rains in May. This pushes them northwards to the lush pastures of the Mara River area of the north-west Serengeti National Park (Tanzania) and the Masai Mara Game Reserve (Kenya). Here it often rains during the dry season, and it was here we were headed next, in hope of finding these herds, and if we were really lucky, seeing them cross the roaring Mara River (They say “the grass is always greener on the far side”).

After our charter from Ngorongoro to the northern Serengeti, we game drove to the bank of the Mara River to see what this formidable barrier looks like. Pods of hippos congregated in pools, and huge crocodiles that were basking on sand banks slipped quietly into the river upon spying us. It is certainly not a river I would want to cross!

After lunch, settling in to the camp, and a siesta, we set off with Albert, our local guide, to look for the herds. We found hundreds of wildebeest lowing and congregating at a bend in the river about half an hour’s drive from camp. What appeared to be floating logs gave themselves away by staying in one spot or slowly travelling upstream – crocs. We watched for about half an hour, but something must have spooked the wildebeest, as they galloped away from the river, and milled around in the shade of some ebony trees. Then another huge column of wildebee 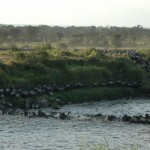 st appeared over the horizon and advanced towards the river, and once again they began to mass at the river’s edge. We had moved to a spot nearer the river bank. The roar of the rushing waters meant we could barely hear the herds grunting. We had been watching this for well over an hour, when suddenly we saw a line of them swimming across!

There was pandemonium as gnus from behind pushed those that were nearer the river, into it, and in minutes hundreds were in the torrent fighting the current to get across. There were so many in the water that we could now hear mews and grunts of the wildebeest above the roar of the river, as they strained to fight the current and keep together at the same time. The dense line of animals was pushed downstream by the current, but near the far bank they managed to fight it and swim upstream, resulting in a huge curve as they searched for a suitable way up the steep far bank. Overall the scene was chaotic, desperate and noisy. Not one animal was taken by a crocodile, as crossing in such a dense multitude intimidated them. 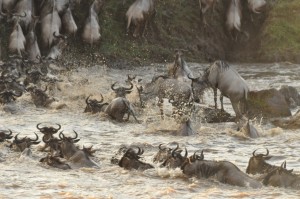 As they all climbed up the far bank, and herds on our side of the river retreated from its bank back inland, the scene became quieter, and once again the noise of the rushing river predominated. Eventually there was only one poor wildebeest left in the river, either too young, too weak, or just unlucky, unable to find a suitable way up the far bank. It began to swim back towards us, solitary, giving us a sense of hopelessness. Surely a crocodile would catch this one? 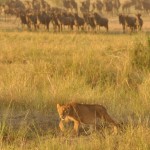 While this was happening we realised that the herds who had not crossed were stampeding away from the river in panic. We could hear the death cries of a wildebeest! I quickly scanned the scene with my binoculars, and noticed that a pride of lions had attempted a chase. We immediately left our spot on the river’s edge to get a better look, and found a pride of three adult females and four cubs on the edge of a stream bank. The cubs were trying to kill an immature wildebeest, and were generally doing a bad job of it, having little experience, but the adult lioness at the top of the bank was confident it could not escape, and was keen to let them do the job on their own.

We felt sorry for the poor wildebeest, and I wondered if our lone wildebeest had crossed to our side, and if it had, it would soon be confro 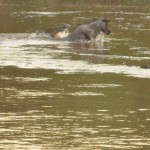 nted by these lions. I had a quick look at the river, and noticed that it was now crossing again to the far side – all by itself. Overwhelmed with choice and activity, we decided to move back to our original spot to see how the swimming gnu was doing in its ordeal. This time it appeared its luck was running out. A massive, really huge, saurian beast was streaking across the river a hundred metres or so behind it. We watched the young wildebeest frantically swim to the other side, almost getting to the far bank, but we could see it was tired. At the same time the massive crocodile suddenly spurted towards it, and in seconds was upon it. There was a violent surge of water, and the wildebeest was thrust out of the water in the crocodile’s jaws, and then forced under, to disappear into the river, leaving no sign behind apart from a gentle ripple.