The Serengeti is a vast ecosystem involving a myriad of players. However the star of the show must go to one of the most eccentric of all the protagonists ....

The Serengeti is a vast ecosystem involving a myriad of players. These include species of grasses, nitrogen-fixing acacias, termites, dung beetles, elephants, ungulates such as zebras and elands, and of the course the predators – jackals, lions and cheetahs.

However the star of the show must go to one of the most eccentric of all the protagonists, and one of the real characters on the African scene – the wildebeest. 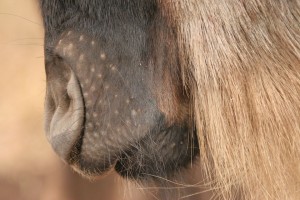 The wildebeest or “gnu” is an odd-looking antelope. It has skinny legs, a fat belly, a beard and a mane, shrunken horns, bulging eyes, a square lip and an impressive whispy tail.

Intelligence is not attributed to the gnu, and they seem mainly content to follow each other around. Sometimes they are seen cantering in one direction, and then minutes later they are trotting off in the opposite direction, in what appears to be nothing more than a waste in energy. Obviously intelligence is not a prerequisite to survival!

Wildebeest have wide mouths, which is a trait specialized for feeding on short grasses, which can be nutritious and abundant when it has recently rained, but shrivel quickly when not watered. Gnus can move fairly quickly and use relatively little energy (often at a walk or leisurely canter) to another area – which is an ideal trait for an animal specializing in short grasses.

Their other characteristic is their tendency to be in huge herds. This is especially so in the Serengeti. Naturally a herd animal feels comfortable when there are others of their species around them, and this reduces the chance they will be killed by a predator. 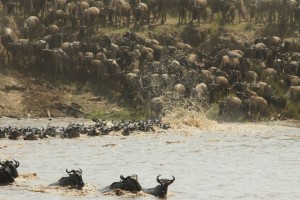 The fact that there are more wildebeest (between 1.3 and 1.8 million) than any other large mammal in the Serengeti belies their seeming simplicity. They are undoubtedly the most successful large mammal on the Plains.

If you spend some time watching them (many safari jeeps drive right past them in search of the predators), their unusual adaptations and character become apparent. Most of all, their mood becomes evident. They are especially wonderful to watch when the grasses are green and life is good. They really seem to enjoy life at these times and frolic around, sometimes galloping, kicking their legs, and swishing their tails![nggallery id=7]