A few weeks ago I left for Ngorongoro Crater with my family, my sister and her three boys. We spent the morning enjoying the wildlife and scenery in the Crater, and then met up with my sister-in-law and her two boys and continued northwards to another lesser-known caldera on the edge of the Great Rift Valley – “Empakaai”.

As we approached Empakaai we noticed fine ash everywhere – on the track, on the leaves and in the air. We could also detect a faint smell of suphur. It could only mean one thing – The sacred mountain of the Maasai tribe, Ol Donyo Lengai, must be erupting.

The view down into Empakaai is stunning. The edges of the caldera are blanketed in thick montane forest (now covered in a fine dusting of grey ash), and the bottom is dominated by a glissening crater lake ringed by the pink and white dots of lesser flamingos.

We found a suitable campsite in the shade of some hagenia (Hagenia abyssinica) trees on the crater rim. We set up camp – a few “pup” tents and a grill over a campfire, and prepared dinner. We then heard an ominous rumble from Lengai and all rushed to a window in the leafy cover where we could see the volcano in the distance. There was a huge dark plume of ash rising high into the sky from the summit. While it made us nervous to be camped there, it was very exciting. After nightfall, when we heard the rumbles, we could see flashes of lightning cracking within the ash cloud.

The following day we all hiked down into Empakaai Crater. The trail was steep and muddy, so I could be excused for slipping and sliding a few times! The little kids ran down! The forest was dense and beautiful, and just before we arrived at the clearing surrounding the lake, we passed some enormous aged fig trees with aerial roots dangling down resembling the matted beards of old wizards (Have you ever seen an elderly wizard? If so, then you’ll know what I mean). We walked along the edge of the lake, watching the flamingos feed and tracking a leopard who was following baboons, and who most likely vanished into the forest. I was excited to see lots of Maccoa ducks out in the lake. There is quite a bit of concern in Tanzania about their numbers and it is not often that we see them. We enjoyed a picnic lunch where frogs and other treasures were discovered before climbing back up the rim. My brother Damian’s little 5 year old boy Jasper insisted on walking the whole way, lightheartedly chatting about his “owie” (the pain) in his legs as he hiked. He really wanted to join us the next day on our hike to Lake Natron, and I must say whatever reservations I might have had earlier disappeared that afternoon.

r Maasai guide Justin (another Justin) and six donkeys to carry some of our gear, and a goat, led by two Maasai herdsmen. My daughter Olethea was the youngest in our party (2 years old) and we carried her most of the way. Our youngest hiker was Jasper. My sister and her three boys (7-14 years old) and myself, Gillian and our two other children Laurence (11) and Alana (8) made up the rest of the party.

As we climbed following the rim of the caldera, with stunning views of Empakaai to our left, our immediate vicinity made me think of a black & white film (movie), as everything along the trail was dusted with various shades of ashy grey. A male bushbuck leaped across the road in front of us, forced onto the trail looking for vegetation free from ash.

It was already baking hot at 10am, and we rested in the shade of a tired hagenia at the highest point, drinking water and munching dates and other trail snacks. The blanketed and dying vegetation reminded me of Narnia’s winter. Where was the witch? Ahead we could see through the dusty haze across the Great Rift Valley where the view encompassed the extinct volcanoes (Kerimasi, Kitumbeini and Gelai) and of course the belching and dominating Ol Donyo Lengai.

Walks with young kids are interesting as in their view it takes ages, and they have to amuse themselves along the way. This proved no problem when we paused for lunch, and they found that wherever they frolicked they dusted off the top layer of ash and left a trail of bright yellow footprints as grass starved of light was given a short-lived reprieve from its fate.

We walked into the small Maasai village of Nayobi after hiking for five hours. Everything was covered in fine volcanic ash, more than half the homesteads were empty, and only small herds of livestock remained. Apparently the animals lose their hair when they eat the ash! I am sure they lose condition from the poor grazing, but the ash is slightly caustic, and a build up could do more damage. The mountain had been in a slu

mber for most of the day, but not long after we set up camp there was a huge eruption, and shortly afterwards there was a biting wind and a storm of the finest ash. I covered my head with a kikoy (An East African sarong or wrap) to keep out the dust, and when I approached a group of Maasai girls who had been watching us settle in to our tents, I must have looked like I had walked out of a Saharan sandstorm, as they ran away from me. The ash-fall was so bad the only place we could escape was inside our tents, where the light pitter-patter sounded like snowfall. We crammed into my tent for dinner and played cards before the kids retreated to their own tents and slept soundly. I nevertheless didn’t, as whenever I was about to drop off, I would be woken by the rumble of the latest explosion and cracks of thunder from the eruption cloud overhead. It certainly seemed that the frequency and violence of the eruptions had increased. I couldn’t help worrying whether leading seven young children along the folds of an active volcano through what was effectively a baking waterless desert was a good idea! 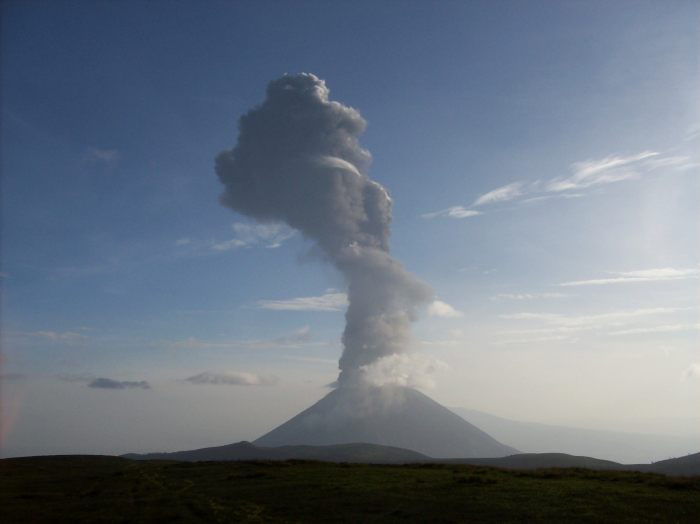 gauge how bad the eruptions were, and if they had ever seen anything like this before. Although some of the younger warriors were worried, the elders seemed to think it was normal, so I thought we could continue our journey.

We walked about 4 hours today, to a campsite in a grove of struggling yellow-barked acacia trees (Senegalia xanthophloea), and protected from the volcano

by a high ridge. It was a really beautiful campsite, and after we pitched our tents some of us climbed the ridge to look at the mountain, which again had been fairly quiet in the daytime. The other children sat with the Maasai as they slaughtered the goat and began roasting it for dinner. Soon after we arrived on the ridge an inky black cloud burst forth from the mountain followed by the roar of a huge explosion. A strong wind rushed

towards the mountain and the cloud seemed to rise to the occasion, bolstered by further bursts of volcanic eruptions, until the black cloud reached way into the atmosphere. A quarter of an hour later the cloud was above us and we could hear what sounded like approaching hail. Sure enough ash began to fall, but this time, since we were much closer to the mountain, it was a lot heavier, and instead of seeping and finding its way into everything it bounced of us and the leaves and fell to the ground, covering it in a black gritty topsoil. The kids loved this as it was like dry warm hail, and they ran around in it, and hid under the picnic table, until the lightning and thunder arrived, when they retreated into the tents!

I slept better this night, as I had become accustomed to the eruptions and the subsequent ashy hailstorms.

Our last day can only be described as surreal. It was like living a dre

am. The scenery was astoundingly beautiful all around us. The light on the yellow barked trees, the ash covered and desert-like mountain folds, the mounting thirst as we drank our last water reserves, the scorching and blinding sun as we walked, which in dreamlike fashion was relieved when a truly massive eruption occurred mid-morning and covered us in immediate shadow, making us feel a subsequent chill, highlighting, as in a total eclipse of the sun, the astounding power of our burning star. Ahead I could see the our youngest hiker skipping along hand in hand with Justin the guide and one of his other cousins, chatting away as if t

his were all no more unusual that a trip to the local market.

We arrived at the waiting Land-Rovers around noon, and drove to a gushing fresh muddy stream where we splashed and rolled, cooled our feet, and the kids screamed as they were whooshed with the current in what must have been like the rushy ride of a waterslide.

of sensations, memorable moments, laughter, challenges, and experiences that will become imprinted in our memory. It is a time that we will never forget. 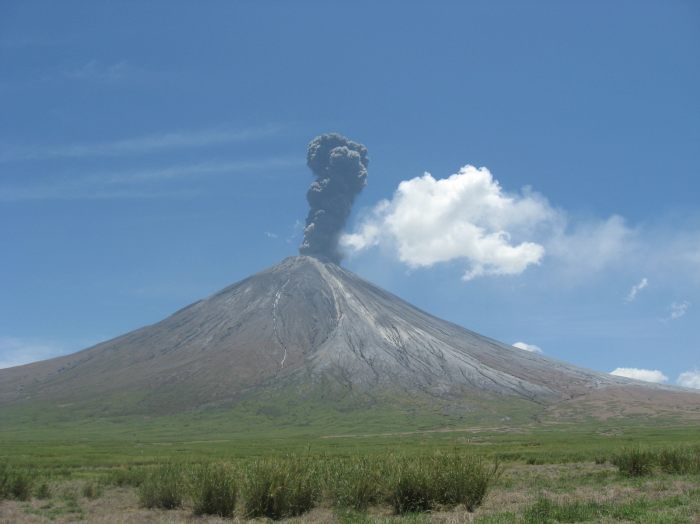