As the crew went about their work preparing the balloon, a lone wildebeest ran up to within about fifteen yards of it before running away again. This happened two more times. 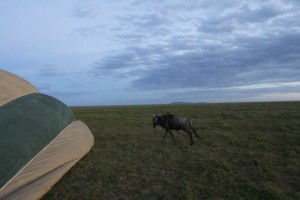 Then a solitary hyaena started chasing the wildebeest all over the plains, following behind at a distance of about forty yards. This continued for about fifteen or twenty minutes. Hyaenas have legendary stamina levels, and the outcome was inevitable.

We all climbed into the balloon in preparation for take-off, but just as the balloon was vertical the wind changed direction completely, causing us to have to disembark, so that the crew could straighten out the basket. 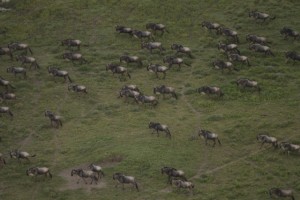 We jumped out quickly, eager to see what had transpired with the hyaena and wildebeest. We were amazed to find that within the five minutes that it had taken us to get in and out of the balloon basket, the hunting hyaena had mustered support, and now a pack of hyaenas had caught up with the wildebeest, and were busy dismembering it. 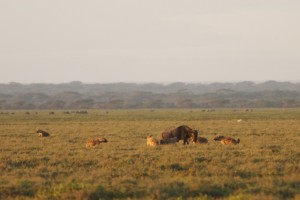 Minutes later we flew right over the kill and were surprised to see that it had almost all already disappeared. 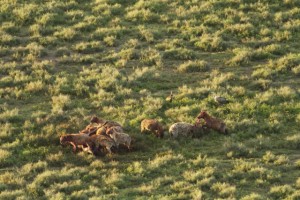 While these things are very difficult to watch and seem cruel, Nature is a finely balanced machine.  Without super-predators keeping herbivore populations in check, the consequences would become far worse, both for the individuals and for the population as a whole. They would starve or die of thirst, because their numbers would get too big for the environment to sustain them.