The hike began on a misty morning passing through eucalyptus stands and rich loamy fields planted with blooming pyrethrum (a chrysanthemum flower, useful as insecticide) and potatoes. We passed smiling barefoot children and ladies dressed in colourful dresses and khangas. By some chance I was tracking with all the girls in our group, and everyone was very excited to set off on their second wild Mountain gorilla tracking experience. Today we were in search of Group 13.

Soon afterwards we entered the forested slopes of the national park. We were now in Rwanda’s Parc National des Volcans and led by Park guide and Warden of Tourism Anaclet Budahera, a charming knowledgeable and cheerful guide.

Occasionally we paused to have a drink, look at birds and listen out for grunts from gorillas. We examined tracks of porcupine and hyaena, and climbed to a point in altitude where the forest was dominated by St John’s Wort and Hagenia trees, whereupon we continued into a patch of bamboo. A moment later we found ourselves amongst our cousins – the largest primates on earth.

We were somewhat spread out in a line in a dark stand of bamboo, and encountered gorillas on the ground and high in the bamboo on both sides of us. It was wonderful and exciting, although too dark to take photos. We then came out into a clearing and could see the huge silverback Agashya, meaning “something special” off to our right. Everything happened very quickly, and before we knew what was going on he charged through us.

Our group reacted by immediately bunching together in a tight ball, all with eyes wide in astonishment, and then after a brief pause, by bursting into laughter! A few minut 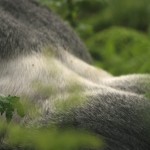 es later he left his harem of females, walking back up past us in a swagger, sat for a brief moment in the bamboo eyeing us up, and then he charged again! This time our group moved aside so quickly and with such rapid precision, that the matriarch of our group, Sue, was trampled underfoot by the retreating others, and at the end of the melee was seen lying in the grass, somehow with her boots off! I was worried that the silverback was somehow responsible, which would have been highly unusual, and was relieved to find out the true story. When our group had recovered from that event and realised Sue was fine, and that it was they who had run over her, even louder peals of laughter ensued, only broken by the occasional pause to double check where his excellency Agashya the silverback was at that moment. This naturally brought on even more laughter. 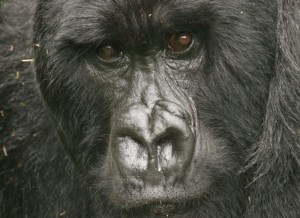 Thereafter wherever Agashya went, there were whispers of “He’s there!” or “He’s coming!”, followed by astounding discipline and co-ordinated group movements out of his trajectory, leaving him ample space. I think his posture might even have gained an inch or two, now that he had seven human women showing him the respect he deserved!

We had a fantastic hour with him and his family, seeing everything from a tiny newborn baby peering at us from under her mother’s belly, to two youngsters romping and playing together, and we even watched Agashya amble towards us and sit down, digging up some delicious morsel, which he examined, sniffed and tasted in delectable pauses as if it were a 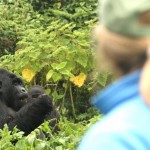 Anaclet told us a wonderful story of how Group 13 had been through quite a few ups and downs. This period ended on the day Agashya challenged the previous silverback, Nyakarima, in a massive fight leaving Nyakarima blind in one eye. Agashya then led the group straight up the volcano to avoid rivals, and has managed to hold the group together, increase its numbers, and ward off any challenges to his authority by other silverbacks, even though he is a lone silverback in a group with no blackbacks (younger adult males). He is an impressive individual, which is something in which our group of visiting girls were in thorough agreement!

Anaclet also told us how sad and defeated Nyakarima later happily found himself a lone female, Ana, who is also blind in one eye, and the two wander the forest together, a contented couple.