Living in the midst of a mountain range, there is a magnetism that draws you towards the mountains and the outdoors.

The most famous hiking trail in Spain must be the Camino de Santiago (St James’ Way). Although this trail passes through our doorstep (a section called the Aragonese Route), the most mythical r 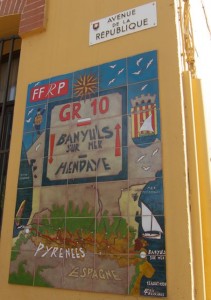 oute for me is the one that crosses the entire Pyrenees mountain range – known as the “Trans Pyrenean Way”, because of its reputation of being challenging and wild.

Actually the Trans Pyrenean is not one trail – There are three main ones, each running parallel to the other. The GR 10 in France runs along the northern edge of the range, the GR 11 in Spain runs along the southern edge, and the Haute Route runs through the highest points along the border, between the GR10 and GR11. GR represents Grande Randonnée or Gran Recorrido meaning a “great” (or long) route.

Traditionally the Trans Pyrenean begins on the Basque coast in the west and follows the Pyrenees Range in its entirety eastwards, ending on the shores of the Mediterranean Sea. However I have been drawn to hike it in reverse, starting in the Mediterranean. I am not sure why, but it may be because hiking that direction seems to represent Man’s gradual migration west – from 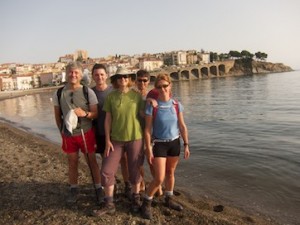 the core of ancient civilization on the shores of the Mediterranean Sea, to its periphery and the barrier to its expansion – the Atlantic Ocean.

So my wife Gillian, some friends and I recently set off on the first stage of this hike. We had divided it into stages, because to complete the Trans Pyrenean Way in its entirety takes from 30-60 days, and we only had 8 days at our disposal.

We began with our feet in the Mediterranean waters at Banyuls-sur-Mer, a French fishing and seaside village surrounded by dramatic rocky hillsides that plunge into the sea.

We left the hotel a little late considering we were in the midst of a heat wave, with a forecast of temperatures exceeding 35°C (95°F). We hiked from the beach, through town. At 9:30am, an hour afte 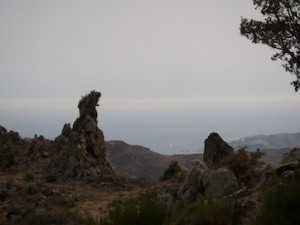 r leaving the hotel, we began climbing up, up, and up, on exposed, rocky ridge-tops and past miniscule, scorching vineyards, tucked between ridge and valley. These plots are so small that even today they are worked by hand, and are known for producing the Banyuls Muscat (a Roussillon dessert wine).

Soon we were rewarded by magnificent views over the rocky bay and the coastline way below. The heat was brutal, as we climbed consistently for about 12 kilometers finally reaching Pic Salfort at 981m (3,218 ft) a little before 2pm. We were saved from thirst by the occasional mountain spring which supplied us with ice cool fresh water. We paused at one of these streams for our picnic lunch, only to continue afterwards – forever upwards, in the scorching heat. 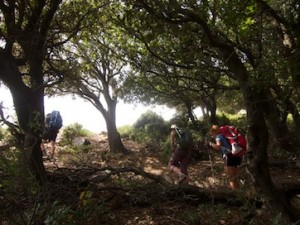 The trail eventually began to pass through welcoming and shady beech forests, although by then our feet were aching and we were dripping in sweat.  We reached our highest point Pic Neulos 1,256m (4,120 ft) at 6pm, and then began to descend through cool forest, reaching the ‘gite’ (guest house) at Coll d’Ouillat a hour later. This was the only place offering a meal, beverage or bed throughout the day, which for Europe is very isolated. 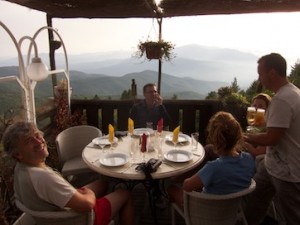 The gite epitomised a sanctuary, not only because we were exhausted, having just hiked an accumulated ascent of 1,800m over 26 kilometres on our first hiking day, but also due to its welcoming timber cabin-like lounge and bar, not to mention the frosty beer, while enjoying magnificent views of the rest of the range from the deck.