We disembark onto the beach and are welcomed to one of the most remote camps in Africa. The waves lapping gently onto the sandy shore are rhythmical and peaceful, but the atmosphere in camp is electric. Talk is centred on who will be the next President. Of course, this camp is not on the arid shores of the Libyan desert, and the executed President was not Muammar Gaddafi.

We disembark onto the beach and are welcomed to one of the most remote camps in Africa. The waves lapping gently onto the sandy shore are rhythmical and peaceful, but the atmosphere in camp is electric. Talk is centred on who will be the next President.

On 2nd October 2011 (nearly 3 months ago) the last leader was murdered by a mob of males – beaten to death, the final blow occurring when a rock was thrown on top of him. While the murder was brutal and shocking, general opinion is that he had what was coming to him.  He was a despot and his rule was based, not on alliances and respect, but fear. The terror of his reign became evident, soon after his accession to the No1 position four years ago, when he murdered Cadmus. Of course, this camp is not on the arid shores of the Libyan desert, and the executed President was not Muammar Gaddafi. 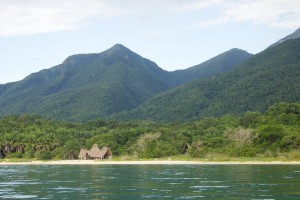 We are in one of the most idyllic places on the planet – at a camp tucked between the shores of the longest lake on Earth and a lush, primaeval tropical forest. The murdered chief was Pimu, one of the most tyrannical alpha males to have ruled the M group chimpanzee community in the Mahale Mountains forest of Tanzania.

The guys in camp are debating whether the new boss will be the wise, respected and generally popular Alofu, or the ambitious and aggressive young upstart Primus. The Tanzanian and Japanese chimpanzee researchers speculate that Primus is king. Apparently Alofu was seen lowering his head to Primus. However most of the staff in camp seem to favour Alofu, partly because he is a nicer guy, but also because they say he plans ahead, mustering support, and to add weight to this the two contenders have been avoiding each other, minimalising confrontation. 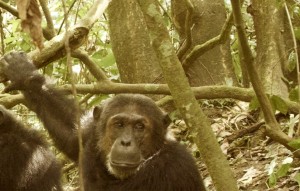 Our chimpanzee expert guide from camp, Mwiga Mambo, is keen to bring an update back to camp. Here there is no television, and the antics of the chimps fill the soap opera niche in people’s lives. 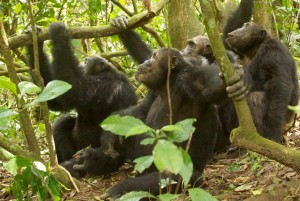 ts” and screams ahead of us – a sure sign we were near the males. Soon afterwards we found ourselves with the big boys – Alofu, Fanana, and Kalunde, who were grooming each other and pant-hooting in the direction of Primus, who was within earshot. Suddenly they disappeared into the forest.

We hacked our way in pursuit, and despite the all encompassing sounds of cicadas squeaking and doves cooing, the forest seemed quiet. Then our surroundings were totally overcome by deafening screams and shrieks to our right.

One of the most peace-loving chimps – Darwin, seemed to be the source of the commotion. Mwiga explained that because Darwin was liked by Alofu, Primus was trying to force him to stay close by, as this way he could weaken Alofu’s position and muster support with the others. However his bullying made Darwin ill at ease, and then Primus attacked Darwin, so that he screamed for help. During all this commotion one of the other males, Orion, charged through the midst of us. There was a moment where we didn’t know which way to look, due to the activity all around us. All the big males were screaming, and Darwin had rushed towards Alofu, who had come to his aid with Fanana. Then the the gang seemed to disappear headlong in the direction of Primus. We could still hear shrieks and screams from all directions. Some of us were shaking from the near encounter with Orion, who had left a while ago. Then the national parks tracker informed us that our one hour with the chimps was up. 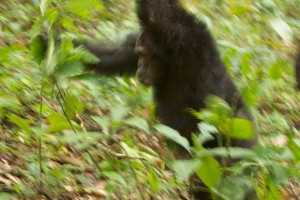 We set off back to camp, pausing along the way, laughing as we recounted the experience to each other. Overall we are overwhelmed by being such close witnesses of the lives of these wild chimpanzees, and like the camp crew, are now involved in the saga, and interested in the different characters. We continue wondering who really is king.

Certainly neither Alofu nor Primus have full control. Anyone visiting M group in the next couple of months is sure to see more encounters of chimpanzee politics in action, and if they are like us, they will have no difficulty in understanding how Jane Goodall became so involved in the group of chimpanzees she studied in the 60s, a group that live on the shores of the same lake in another national park, Gombe Stream, further north.

If you would like to see more photos of Mahale, I posted some on our Facebook page.