So, Wild Dogs hunting on Day One at Vumbura. Could Day Two possibly come close to that?

The following afternoon we had planned a mokoro (dugout canoe) ride in the Delta. We set off from the camp after tea, heading in the direction of the place in one of the channels where the mokoros are kept. 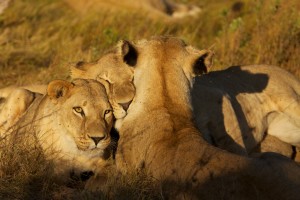 On our way we came across six lions (two adult females and 4 sub-adults) resting in the shade. They were a good-looking group, and in keeping with lions, were excelling at what they are best at – sleeping!

It was getting cooler, and after a while one of the sub-adult males got up and ambled to one of the other young lads, to rub and stroke him. In the process we noticed that they hadn’t eaten for a few days. They looked healthy and lean. After some debate we decided to wait and watch them for a while longer. There was a good chance that they would become more active – a rare thing to see with lions! We radioed the camp to cancel the mokoros. 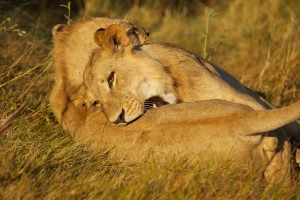 Over the next hour the cats became progressively more awake and playful. At first they greeted and cuddled each other.  The sub-adults played a bit. Then they started looking around. A while later they left their shady spot. Emang drove the Land-Rover through a deep section so that we were well positioned on the far side of a track that crossed the swamp. The lions were waiting at the far end, looking around for prey and contemplating crossing the wet patch.

We got some great photos as they drank and then approached us, passing right by the vehicle. We followed them to a spot where they stopped, overlooking the swamp and an island. They lay down in the shade, and soon afterwards one of the adult females spotted a lechwe buck feeding on the island. She wasted no time in reacting, and we watched her stalk intently towards the swamp. The sub-adults all shrank to the ground and watched the procedure as avidly as we did. 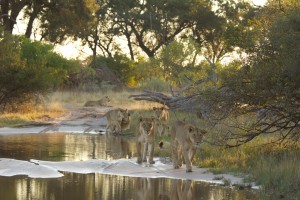 Each time the lechwe raised its head to look around the lioness froze, and as soon as he resumed feeding, she continued the stalk. She was so patient and so skilled, it was a pleasure to watch.

The huntress began to enter the swamp, and several times disappeared from sight among the reeds. She had to move slowly here to avoid any sloshing sound of her feet moving through the water. It was so exciting to watch.  A kudu appeared on the island, and we thought that either the lioness may change her target, or the kudu would hear her swishing through the marsh. Kudus prefer thick bush, and have hug 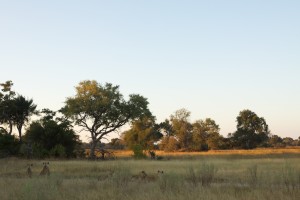 It began to get dark. Finally we saw the lioness arrive at the island, but the kudu had disappeared, and the lechwe had moved behind the island, the lioness in deliberate pursuit. However it was too dark to see more, so we left.

We were crossing the bridge across the swamp, and stopped and switched off the engine to listen to the reed frogs calling. Just as we did so we heard the bleating cry of an antelope in distress. The lechwe!

We rushed back to our spot and crossed over to the island. Two other Land-Rovers had arrived at the scene. Emang got out the spotlight, and shone on all the lions growling and feasting on the lechwe in about a foot of water. He stopped the rover a couple of feet from the kill. The noises were phenomenal, easily putting a Harley-Davidson to shame! We watched enthralled as they growled, fought and sloshed over the feast. One of the lions chased another with a piece of meat until it slammed into one of the other jeeps! Within minutes there was little more than bloodstains and bone remaining.

There was plenty to talk about in camp that evening!