A contrast to the scenario from my previous post was to happen a few days later when we found two hungry sub-adult cheetah attempting to hunt in an area further west of the Serengeti Plains, where the migratory herds are unlikely to arrive until June. 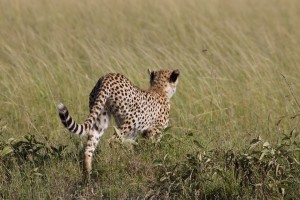 They were young siblings about 2 years old. There was plenty of resident game, but none of the lost wildebeest calves and hidden Thomson’s gazelle fawns that we saw on the Plains a few days ago.  Furthermore the grass here was much longer, providing more cover, but also a more obstructed view of the ground and prey.

We had a rare opportunity to see these two poor sleek cats stalk and chase first a Grant’s gazelle and when they can barely have recovered, most probably due to desperation, an adult Thomson’s gazelle. 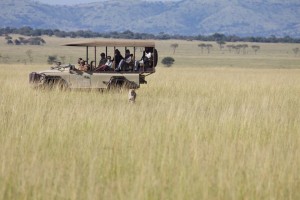 It was so exciting to watch, even though we were quite far from them, so as to not disturb them or their prey.

Their stalking skills were well honed. Each time their potential prey looked up they froze. Each time the prey bent down to eat, they moved slowly and deliberately for the nearest cover. It was like watching a synchronized dance, each moving in precisely choreographed timing. 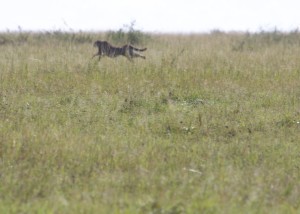 They failed both times due to impatience, beginning the chase too early, from only about 150-200m (way too far) from their target. This was probably due to lack of experience. But what a sight is was to watch them sprint!

Most successful cheetah chases begin around 100m (110 yards) or less from the prey.  Chases that begin 50m from prey have a very high success rate. Although they can run for well over a kilometer, they cannot maintain full speed (around 112 km per hour / 70 miles per hour) for more than 300m, and they usually only run their maximum speed for about 100m. 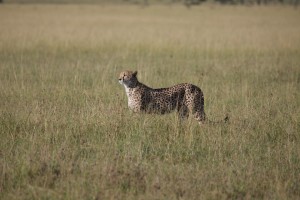 We left feeling sympathy for these two, and appreciating that even though prey animals may be abundant, the predators usually have to work hard to get a meal. Overall chances of their survival will depend on conserving energy, keeping an eye out for other predators, and skill and patience when hunting.

We had breakfast overlooking the vast landscape, and later in the day found them resting under a bush. We hope they kill soon!