While driving in the late afternoon from a camp just inside the woodland on the edge of the Serengeti Plains to a fly camp we had set up farther east, we spotted an unusual hyaenid feeding in the grassland. 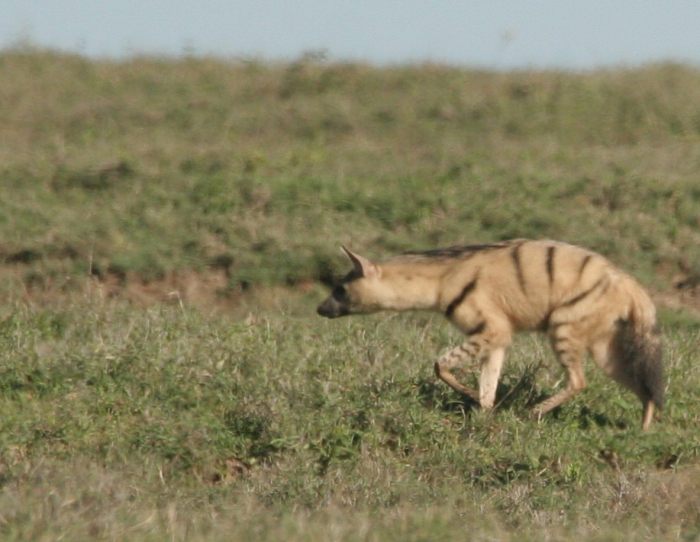 It was an aardwolf (Proteles cristatus), one of the most exciting unusual animals to encounter. We watched it listen intently with its large pointed ears indicating a spot upwind where its favourite food was feeding in the grass – harvester termites! It would then rush forwards sniffing carefully first, have a few rapid licks, and move on in search on more juicy termites.

An aardwolf looks quite a bit like a striped hyaena, but is smaller,

with more of a curved back, and has a neater, less shaggy coat. While it is mainly nocturnal, it is also seen feeding in the late afternoon, whereas I have only seen a live striped hyaena at night. Unlike its cousins, the spotted and striped hyaenas, it rarely eats the flesh of mammals or reptiles, has only small peg-like teeth, and a wide snout, and specialises on termites.

At one point it stopped feeding, turned to face us with ears cupped, and

listened intently. It then ran away from us for about 100 metres, stopped and turned facing us to listen again, before deciding that even though we were far away, we were really bad news (those nasty hominids!) , and then bolted through herds of zebras and gazelles, making them start to run in panic, mistaking it for a spotted hyaena (the mean killing machines).

We chatted about our unusual sighting for a few days after that, as aside from feeling lucky to see it, we were in a really beautiful unspoilt part of the Serengeti Plains, teeming with game.