Watching hippos bask in a pool of water, wheeze-honking every now and then and snorting when they come up for air, would make you think their lives are pea 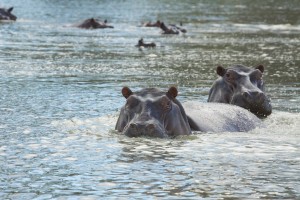 However hippos depend on water to keep their bodies cool, and have a harem breeding system, so the males compete intensely for the best pools, and for females. They are often scarred, and sometimes have terrible battles for dominance.

We were on a game drive in Moremi National Park (Botswana) soon after sunrise, when we came across one of these “peaceful” hippo pools. 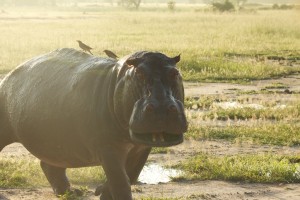 Soon afterwards we saw a bull hippo chase another scar-covered male out of his wallow and off into the grasslands. We followed this poor individual, as he looked for a suitable alternative resting pool.  The light on the grassland and forested backdrop was dramatic.

Leaving the hippo in peace, we next came across a young bull elephant, ambling towards 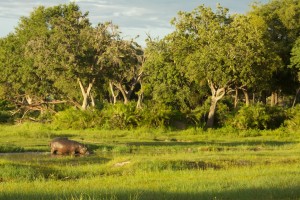 a perfect pool for a morning drink. Then we noticed that the hippo we had been watching was headed for the same pool. Naturally, we wondered what the outcome of an encounter between the two pachyderms would be.

The hippo opened his jaws and waved them in threat at the elephant, and then proceeded towards the pool. The elephant shook his ears and trumpeted in mild threat, and stood his ground. The hippo threatened again, and continued his approach.

To our surprise, the elephant then pranced away in as dignified a manner as he could, holding his head high in retreat. 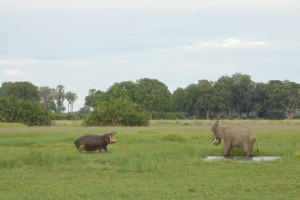 The hippo slipped into his well earned pond, no doubt still fuming from his earlier encounter with the other bull hippo, but perhaps feeling a little better about himself.