While on safari in Botswana’s Okavango Delta, I was awakened at 02:30 one night by the familiar sound of snoring, but with a slight difference. It sounded like someone snoring down a hose pipe half-filled with water, creating a sort of gurgling sound as he snored. It was indeed an elephant bull fast asleep against the base of a termite mound situated about ten feet from my tent. 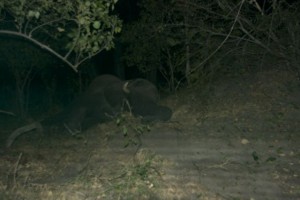 I went over to the window of my tent and pushed a flashlight up against the gauze and switched it on. The elephant bull was lying down, fast asleep on his side.  At first I did not want to take his picture for fear of giving him a fright and waking him up. However after being kept awake for over an hour, I decided that he was in a deep enough sleep to try, so I did, and the results were great! 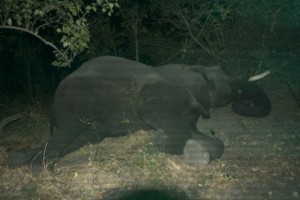