Safari guides Dave, Ole Kirimbai and I have just come back from another wonderful safari in the Serengeti with some great folks from western Canada. Although it was the “green season” it hadn’t rained for a while so, while a lot of the game was out on the Plains or in the surrounding woodland, it was very dry. When I remember this safari I will always think of the cheetah (Acinonyx jubatus), the most endangered big cat in Africa (see the bottom of this article to learn about population levels).

I once guided a safari in the Serengeti and we never saw these wonderful animals. Only once! I couldn’t believe it, as the Serengeti is one of the best places in the world to see them. While we saw many lions, a serval and other exciting predators, we never saw a cheetah. Not one. I kept saying this was very unusual, and the Serengeti was a good place to see cheetahs, but even today the same folks wink and nod their heads, and suggest that it is a hoax and is just part of the marketing – “Serengeti – cats – cheetahs”. If they really want to get at me, they hint that perhaps they would see cheetahs if they had a different guide!

Cheetahs are really and truly stunning, sleek, slender, superb, sexy cats (I should send that line to the cheetah researchers)! I once had a film crew on safari filming the “Wild Things” series for Paramount. It was one of these modern CNN style documentaries of sound bite sized news clips of wildlife in action. It was actually very popular at the time. The guys wanted action – a kill.

Well I can guide safaris for a whole year and if I am lucky I might see one or two kills, so you can imagine how difficult a request like that is! Most wildlife photographers spend months in one area trying to get the right scene. However, the good thing about most film crews is they will do whatever is necessary to get their shot, including waiting in one spot for hours on end.

If you want to film a kill, you need to find a predator. While there are a lot of small predators (servals, jackals, ratels, mongooses etc) most people want to see the big guys in action as they kill big prey (lions, leopards, cheetahs, hyenas and wild dogs). Of these, three are mainly nocturnal (lions, leopards, hyenas), or at

least sleep most of the time once it is hot (from about 9am-5pm), one is sadly extremely rare in the Serengeti now (wild dogs), so the only large predator that is apt to be active during most of the day is….. the cheetah. It helps if you either find a hungry, skinny and active one, or a female with young as they are always hungry! It also is a good idea if you can find one within sight of some prey, otherwise you might have to wait a while.

Well, when I received that request I realized I had to find a hungry cheetah, and so we set off for Gol kopjes, one of the most magical places on this planet.

Just north of there in a valley which is now in a restricted zone that some of us guides called “Cub Valley”, we found a female cheetah who looked hungry within sight of some “meals” – Thomson’s gazelles. We parked the Land-Rover nearby, and waited. We chatted in whispers for a while, munched on some biscuits, and when still nothing happened, we began to read, leaving someone on “watch”. We seemed to wait there on the edge of that sun-seared baking hazy valley for hours, and that cheetah just lay there. The most she did was flick her long tail, or occasionally sit up, look around (usually both for prey and other competing predators), and lie down again.

Suddenly she wasn’t there! We all dropped our novels and scanned around. Where is she? Then we saw her stalking a hundred yards ahead of us. The film guys said “Let’s roll”. I was meant to provide a commentary, and before I knew it the camera was on me, we were moving, the cheetah had begun her chase, and I had to say something sensible. I began by saying how we came across this cheetah who seemed hungry, and now she is hunting, and then continued a bit like a rugby commentator. We were charging across the Plains, the camera was bouncing up and down, and the cheetah had made her kill. We just got the end of the kill in the distance on camera, and were approaching to film her biting the gazelle’s throat and beginning to eat it when we saw a hyaena rushing towards her, and a minute later she had run off, and the hyaena was crunching into the “Tommie” as if it were a pretzel. This is how many cheetah kills end, and is why the really smart experienced cheetahs look out for other predators before attempting any chase. Despite our unpreparedness and the unexpected outcome, the shoot was a success and we headed back to camp in high spirits. 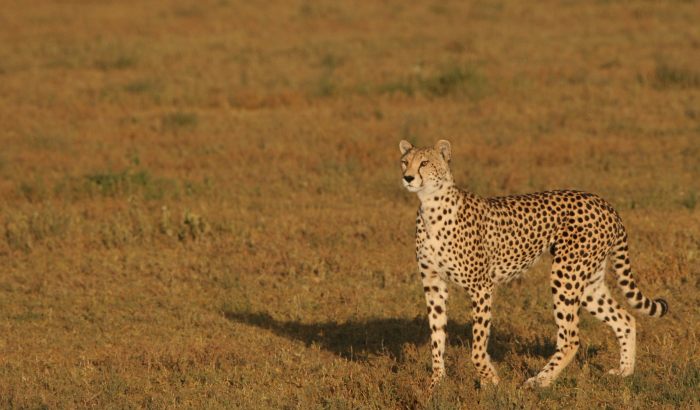 Well, I really chose to write about cheetahs, because this last safari we saw a phenomenal amount of them. In fact aside from the 2 we saw in Ngorongoro Crater,

we saw at least another 19 cheetahs over 6 separate sightings during our 7 days in the Serengeti! Out of those 6 sightings, 1 was an attempted hunt and 2 involved successful kills (one of those they killed twice)!

Our first Serengeti sighting was a female with three sub-adult cubs. They were a lot of fun to watch as they were hungry. We watched them look for prey, fan out and sweep an area in the hope of flushing a hare or young gazelle, stalk, and we saw a chase. At this age (about a year old) they are becoming more involved in hunts, but lack the experience and patience to pull them off successfully. They were stalking a

Thomson’s gazelle in a herd of Grant’s gazelles when one of the cubs sat upright, and alerted the gazelles who trotted off. Later they attempted a second stalk, and by mistake they flushed out an African wildcat (the ancestor of the domestic cat) who rushed off in mad panic, inducing a chase by the cubs, who just couldn’t help themselves. They had been getting close to their target, but of course the gazelles saw the cubs rushing off in pursuit of the terrified wildcat, who at one point had to turn and face them, hiss, and spit, before rushing off into someone else’s burrow. After that frenzy there wasn’t a prey species in sight!

Our second camp was still in the Serengeti Plains, but was outside any conservation or protected area, in Piyaya (Loliondo). Here on our last day in

the “Serengeti” some of us saw another female cheetah and three cubs hunt twice! It was those in Dave’s car who saw the first kill, a Thomson’s gazelle, and we arrived in time to see them finish it. They left so full that it was painful to watch.

Just then we saw a lost baby wildebeest trotting from a rise towards them. Quickly the cheetahs crouched down low in a patch of long grass and waited. We couldn’t imagine they would hunt again, although this opportunity would be an excellent one for the mother to train her cubs to kill. The wildebeest continued in its aimless journey closer and closer to the cheetahs, until it was almost on top of them. Then they burst o

ut of cover, almost surrounding the little animal. The wildebeest put up quite a chase, mostly because of the inexperience of the cubs. Finally the mother dispatched it, and they sat down to another huge meal! All of us couldn’t believe how they managed to eat so much of that animal! On our way back to camp we came across brunch ready for us in a beautiful kopje, and not surprisingly the conversation was dominated by the spectacle of watching these last cheetah perform! This was quite a dramatic ending to an amazing safari!

Note: All the photographs displayed in this article were taken by either Justin Bell or Dave Christensen while on this one safari.

speed of 110 km/h at faster acceleration than a Corvette. During its chase, at two points in the stride no feet touch the ground. It can cover 8 meters in a stride. However it cannot maintain this pace for much more than 100m, and cannot run really fast for much more than 400m. Its special adaptations designed for speed include its flexible spine, huge heart and liver, wide nostrils, increased lung capacity, non-retractable claws (all other cats have retractable claws) and thin muscular body.

DID YOU KNOW?
1. Female cheetahs live alone or with dependent cubs, whereas males either live alone or in permanent coalitions of two or three individuals?
2. In the Serengeti National Park (Tanzania), the males compete over territories of about 40km2 on average. This is why sometimes it is an advantage for males to form coalitions of 2 or 3 individuals, as coalitions keep territories for longer. Many single males occupy smaller territories where few females roam, or become nomadic covering huge ranges, and must be constantly on watch for resident male cheetahs, as well as other predators. In Namibia the males occupy ranges of about 2,200 km2 !
3. Females utilize huge annual home ranges of about 800 km2 in the Serengeti,Tanzania, sometimes having favourite dry season and wet season areas that are far apart. In Namibia they have larger ranges of about 3,800 km2 !
4. Cheetah cubs in the Serengeti suffer extraordinarily high mortality. A study of radio-collared females showed that only 36% of cubs reach 2 months of age, and only 5% survive until independence at 18 months. 75% of known cub mortality is due to lion predation (So much for “The Lion King” portraying lions as “goodies”)!

THE CHEETAHS WE SAW

If you have photographs of cheetahs in the Serengeti and know the location and date that you saw them visit the Tanzania Cheetah Conservation Programme site.

THE SERENGETI
The area of the whole Serengeti national park is about 15,000 sq km.

The Serengeti ecosystem comprises the Masai Mara Game Reserve in Kenya, and the Serengeti National Park, Maswa, Ikorongo and Grumeti Game Reserves, the Loliondo Game Controlled Area and Ngorongoro Conservation Area in Tanzania. The area of the ecosystem is about 30,000 sq km.