We offer custom safaris in eastern and southern Africa. The recent outbreak of ebola in Guinea, Sierra Leone and Liberia in West Africa has hit the world news, and consequently we have been asked by folks coming on safari about health safety issues.

Our clients’ safety is paramount, and if we thought it remotely unsafe we would inform them. We are assessing the ebola outbreak daily, and currently we see no reason at all to stop traveling to eastern and southern Africa.

This may seem strange to someone watching the news frequently, and here are our reasons why we
1.  currently consider our guests or guides are safe traveling on safari in eastern and southern Africa and
2. are continuously monitoring the situation –

1. WHY DO WE CURRENTLY CONSIDER IT SAFE FOR OUR GUIDES AND GUESTS TO TRAVEL TO EASTERN & SOUTHERN AFRICA?

a) Transmission – Ebola is a disease passed by contact with bodily fluids.

It is not an airborne virus like the 2009 H1N1 swine-flu virus that began in Mexico and the USA and spread world wide (reportedly 265,000 Americans were hospitalized, and 12,000 Americans died of it that year).

Is it safe to travel to West Africa on business or to visit family and friends?
The risk of a tourist or businessman/woman becoming infected with Ebola virus during a visit to the affected areas and developing disease after returning is extremely low, even if the visit included travel to the local areas from which primary cases have been reported.

Ebola is a nasty virus that quickly results in the patient being very sick once symptoms begin, producing high fevers, which make it extremely likely that the infected sick person will rapidly stop moving around and seek medical help. WHO state:

Even in the affected areas the majority of the people who have contracted ebola are family relatives or those working in health centres there, not the general population.

The same applies to the few ebola cases outside West Africa (Dallas & Madrid), where nurses who were treating ebola patients (who had traveled from West Africa) are now at risk or have ebola –  again, the general population has not been affected.

c) For the reasons given above the risk of contracting ebola on an international flight is also extremely low.

“Because the risk of Ebola transmission on airplanes is so low, WHO does not consider air transport hubs at high risk for further spread of Ebola,” says Dr Nuttall.

d) Geography – Note that the above advice relates to West Africa, not eastern and southern Africa, which currently (Oct 2014) are far from any affected country.

To have a better idea of risk of transmission due to geographical proximity to the outbreak two factors should be considered –
1. the distance from the epicenter to the places we go on safari, compared to other places, and
2. the frequency and number of international flights between the two.

Here is a map printed in the Washington Post on October 13th, 2014 showing this quite clearly. 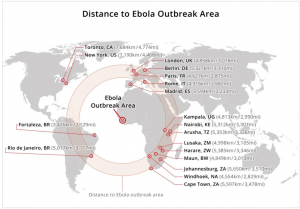 You may notice that Rome, Italy is about 1,000 kms (20%) closer to the epicenter of the outbreak than Arusha, Tanzania, and Rio de Janeiro, Brazil is closer too!

Africa is very big, and the areas that we travel to are very far from the epicenter.

In October 2013 we posted a link on our Facebook page to another Washington Post map of Africa showing its size in comparison to other countries. It is an eye-opener!

In terms of frequency of international flights (a measurement of how easy it is for people to move around), Europe has way more direct flights to West Africa than eastern and southern Africa.

Travel by road in Africa is notoriously difficult and arduous. The disease would only be able to spread very slowly by this method, and that is why in past outbreaks it died out before it spread far.

2. WHY WE ARE CONTINUOUSLY MONITORING THE SITUATION

Although it is unlikely that ebola will spread rapidly as health centers and airports become more aware of how it is transmitted, and how best to limit its spread becomes more common knowledge, it is highly likely this epidemic will get worse over the next few months, especially in the affected countries in West Africa.

We consider that one of our biggest roles is our expertise on Africa, and to advise and design the best journeys for our clients. Almost all our business is by referral, and about 30% of our journeys are for clients who have already been on a previous safari with us. Monitoring this epidemic is therefore essential to us. This does not mean that we consider the risk level to change much from extremely low, but it is our duty to be well informed.

An advantage of this lamentable epidemic may be that the scare and media coverage results in areas that are often hard to book such as Botswana and northern Tanzania becoming easier to book for 2015. A sad additional result of this epidemic is that it is effecting the livelihood of many hard-working professional people in eastern and southern Africa, especially those who work in the tourism trade.

Perhaps the saddest fact to us is that the epidemic has received a lot of media coverage, but very little grass-roots action to help the situation, such as during the 2004 tsunami. The countries worst affected by that (Thailand and Indonesia) may thank the fact that at that time (European winter) their beaches were populated with western holidaymakers, catapulting the news coverage, reaction and a rapid international response.

This ebola epidemic has occurred in a poor, little visited part of West Africa, and has so far affected a handful of Westerners.

Our complacency and treating this as an African, rather than a World, problem is allowing this virulent virus to develop a human reservoir. This will mean that instead of dying out quickly, as it has in previous outbreaks, ebola may now become an endemic human disease, once it has better adapted to survive in humans and not kill its hosts too quickly (which is what most viruses eventually do, including the common cold).

If you feel strongly about this, please help Médecins Sans Frontières (Doctors Without Borders) and others provide more isolation wards and beds, and to care for those sick with ebola in those countries now!

Further updates will either be posted as a new post or added as comments.