Ten days ago, over a weekend, we drove a couple of hours south of Arusha to an area where much of the migratory game we encounter in Tarangire national park in the dry season spend the wetter green season.

We drove through vast areas of bush and grassland, passing the odd Maasai

herdsmen, and a Maasai market on the way. We then cut westwards through a thicker stand of acacia trees, where we saw hundreds of vultures skulking in the treetops. We found a couple of Cape buffalo killed by lions and a waterhole nearby.

After we had set up camp, and compared the webs of the kite spiders with the beautiful golden orb spiders, we heard the barking of zebras, splashing, and general commotion at the waterhole.

We crept down to a natural hide formed by a thick bush, but hollowed out inside,

no doubt formed by the habits of a predator, and by some freak of luck and accident the rustling and chattering of our excited kids did not unduly disturb the herds at the waterhole!

It was quite a sight to sit there still, hidden in the shadow of the vegetation around us and peek at the commotion in front of us…. the ungulates overwhelmed by thirst and aware that lions often attack in such places, comforted only by their numbers. Us, overawed and totally immersed in the spectacle, the sounds, the urgency of the proceedings, and unnoticed, just observers. 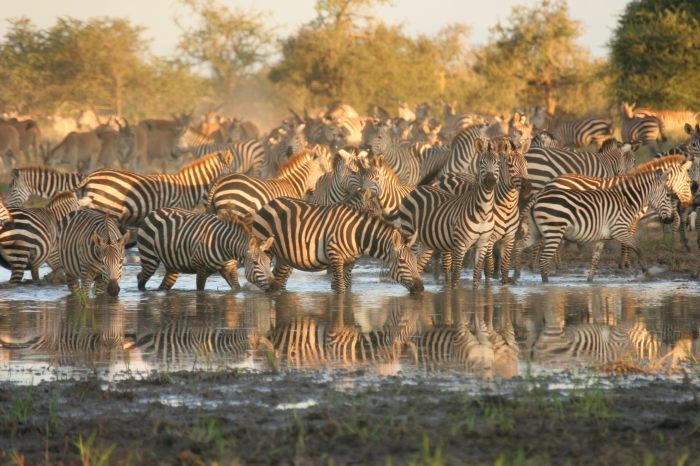 It is moments like this, and especially with my children sharing the experience, that make me feel so privileged to be witness to such a scene. It is something that our long ago hunter gatherer African ancestors no doubt would have done, and the experiencing of it must be in our blood. I have such a feeling of belonging, to being a part of it all. I suppose this might be accentuated by our modern bustling lives, seemingly so far removed from it all?