My son Laurence, his cousin Christopher, and I are about to embark on a journey.

Traveling for several days from one point to another, with a specific aim in mind, is deep rooted in human culture. Most, although not all, of us aspire to at least one such adventure in our lifetime. 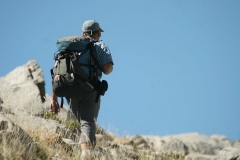 While leading a Kilimanjaro climb I sometimes wonder at the attraction of the challenge. It seems bizarre to hike to the top, spend half an hour taking photos and then to hike on down. While the aim of reaching the summit of Africa is important, I think people love the camaraderie, the absence of noise of the modern world, and above of all the experience of a journey on foot, which is deep rooted and a part of our very being. 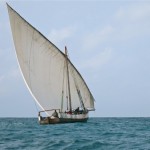 For most of us, a journey has more meaning if we travel on foot, on horseback, or in a sailboat. The most famous route for such a journey in Europe must be the Way of St James, also referred to as the Pilgrimage to Compostela, which in Spanish is called El Camino de Santiago de Compostela.

This pilgrimage began some time after the Moors invaded the Iberian Peninsula in AD 711, and became a rallying point for the Reconquista of Spain, which was not completed until the Muslim stronghold of Granada fell in AD 1492. The Moors held the far north of the Iberian Peninsula for only a short period, as their conquest was brought to a halt when they lost at the battle of Covadonga in AD 722 to Pelayo, King of Asturias. As a result, during most of the period of the Middle Ages when the rest of the Peninsula was under Muslim rule, the Way was open to Santiago from France or elsewhere in Christian Europe.

Pilgrims would start from their doorstep, mostly on foot, although the wealthy would travel on horseback, and head for one of the mountain passes through the Pyrenees. Inevitably the various trails would join, until not far from Santiago they would find themselves on a wide highway serviced with inns and pilgrims’ “Hospitals” (special lodging). After the re-conquest the Pilgrimage route gradually went into decline, until a recent revival in the 1980s.

The trail naturally went from fortified town to town, following the easiest and most level terrain. With the arrival of the automobile in modern times, the same route has been upgraded with sleek tarmac highways. Today, for most of the Way, the trail winds a few kilometers on either side of these various highways. 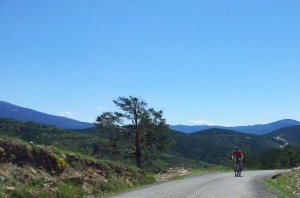 Laurence, who is now 15, is not really a sporty lad. He surprised me a couple of years ago when I started to bike with him to school from our village, a commute of 7 kilometers each way, mostly on back roads. He would even bike to school on freezing winter days, and it was not long before he would bike on his own, as I invented excuses to avoid battling the elements on dark frosty winter mornings. His regular biking and occasional forays for short periods surfing has made him fit and strong.

Since we live in Spain, it seems fitting for us to make the approximately 850 kilometer (530 mile) journey to Compostela, or perhaps even a little further – to Finisterre, the edge of the Western World, overlooking the Atlantic Ocean. I mentioned the idea to him and he was keen to do this by mountain bike, and soon after his 16 year old cousin Christopher, from Liverpool, signed up too. 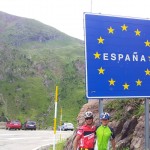 So yesterday Laurence and I began the adventure by biking from our village up to Somport – the 1,688m mountain pass on the border with France, where many pilgrims begin their journey. It was a 75 kilometer ride with a cumulative gain of 1,790m, so was a good warm up. However we did this with no bags. Today Christopher joins us and we continue from our village, through the medieval town of Jaca, and onwards with all our gear.

I will post the occasional update on our journey here, and more frequent photos and comments on our Facebook page. Follow us to the edge of the known World!