I catch the daily morning flight on KLM from Amsterdam to Kilimanjaro in Tanzania. The airport terminal disappears from view within a few minutes of leaving the gate as we taxi through the mist and line up for take off. There is not much to see through the window but cloud, and I only realize that we are airborne when the angle of the aircraft points sharply upward, and we bounce and bank into the sky. After about half an hour we are suddenly in brilliant winter sunshine. Below us is a blanket of cloud. 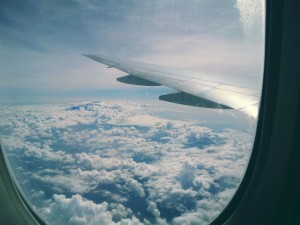 Later the rugged and snow-capped peaks of the Alps are visible. Finally the cloud changes from an interminable blanket to puffs and ephemeral wisps, and the dry coasts of Italy and Greece contrast with the deep blue of the Mediterranean. I am watching “Searching for Sugarman” on the mini-screen, with the hum of the engines in the background while lunch is served. Soon all I see from the window is that vast expanse of desert – the Sahara. The movie ends and I read for a while, and then watch another film. Hours later the sunset colors appear and I peer out of the window. We are still flying over the Sahara! Night falls and the aircraft bumps a bit more as it enters air pushing over the moister highlands of the Great Rift Valley, and we begin our descent. By the time we land the flight will have taken nearly 9 hours and we will have flown about 7,000 km (4,300 mi). This flight is further than Amsterdam to Minneapolis, USA (or Edmonton, Canada).

Why have I described my flight to you on our blog?

On my last safari in the Serengeti, driving among the migrating herds of wildebeest and zebra, we saw lots of other migrants, especially birds.

One bird that caught our eye was a White Stork. Yes, the same ordinary bird that is known to nest on church steeples, and is fabled to deliver the babies!  They spend the summers in Europe, and now they were here. I described my flight to give you an idea how far that distance seemed to me. 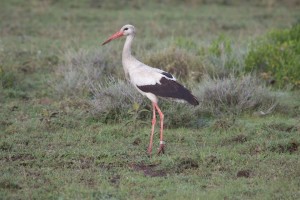 We drove past thousands of White Storks, but we noticed one with a metal ring on its foot. I couldn’t read anything on the ring through my binoculars, as the stork was moving, picking juicy caterpillars and crunchy grasshoppers that skipped away from the brushing hooves of the gnus, so I took a photo.

In camp I blew up the image of the metal ring on my laptop, and could make out POL 467 and the bottom row seemed to have GDANSK on it. So it was ringed in Poland, quite a bit further north than Amsterdam! 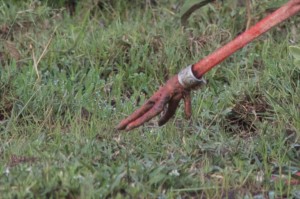 When I got home I searched for ornithological researchers in Poland and sent them copies of my blown up photos, the exact co-ordinates of where we were, and the date and time.

Soon afterwards I received an email informing me that the bird was ringed on July 1st 2012 – 254 days after we saw it. It had traveled 6,454 kilometres (Over 4,000 miles) in a direct line, so naturally much further in real terms. Click here to get an idea of this journey.

White Storks can complete the autumn southward journey in about 25 days, and the northward journey back to the breeding grounds in Europe in twice as long a period, due to less favorable winds and food scarcity which forces them to travel further. Since they can live for 35 years, and they fly this distance twice a year, how far could one travel in its lifetime – perhaps over 455,000 kms (283,000 mi)?

The stamina of these creatures, and many other migratory bird species is astounding!